Day 8. I'm feeling rather bleary eyed this morning after less than 4 hours sleep. We rolled into Mammoth Lakes after leaving behind the Bay area in the morning at around 10pm. At an altitude of 8000ft (2450m) I'm really feeling the effects when trying to sleep. Perhaps that's not too surprising given that we're effectively in a town on top of an Alp.

It's like a cruel joke. The conscious part of my brain is able to tell me that I'm fine and not about to suffocate but the moment I nod off that stops and I jerk myself awake. It's 4am. Lame. Anyway, enough moaning... Back to the main event of the day though, Yosemite.

Wow. This is place is simply incredible.

Dare I say "better" than anything I've seen in Europe?! Not that landscapes are a competition but like just like everything else in the USA, even their National Parks are bigger, better and wilder. Of course, the Alps are in the heart of one of the most densely populated areas of the world so perhaps it's not surprising humanity has largely tamed them. For our honeymoon we took the train up Jungfrau which was an experience to remember.

I'd read horror stories of the traffic in Yosemite valley. 1hr queues to simply enter the park plus nose to tail traffic in the valley itself lasting 3-4hrs. Peak times are supposedly 12-4pm so we didn't bust ourselves getting there from the bay. We entered the park around 3.30pm, rolling straight up to the gate. Paid the $30 entry fee (valid for 7 days) and wound our way through the burned matchsticks formerly known as trees to the valley floor. 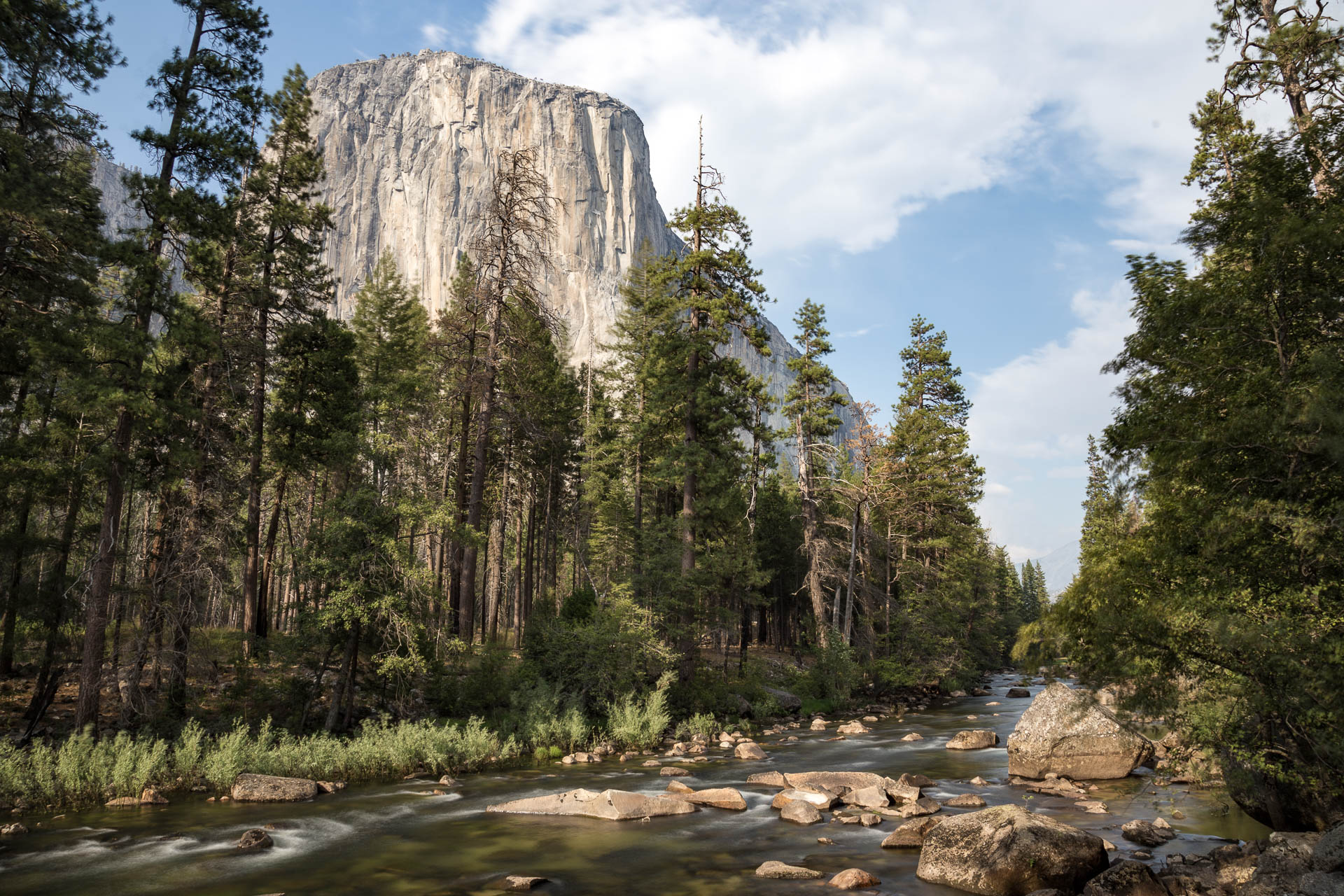 You can't help but notice El Capitan's sheer cliff face rising high above you the moment you enter the valley. I adore the colour of the rock and it's textures. I experimented further with my daytime long exposure technique getting just the right look to the water I was after this time.

The aforementioned horrenda-traffic never materialised, though I can think of many worse places to be stuck in a 4 hour traffic jam!! The atmosphere of the valley in early evening was wonderful. Hundreds of families camping out together, enjoying the 30c temperatures and such. Given that it's mid August, I honestly expected busier so that was a nice surprise. 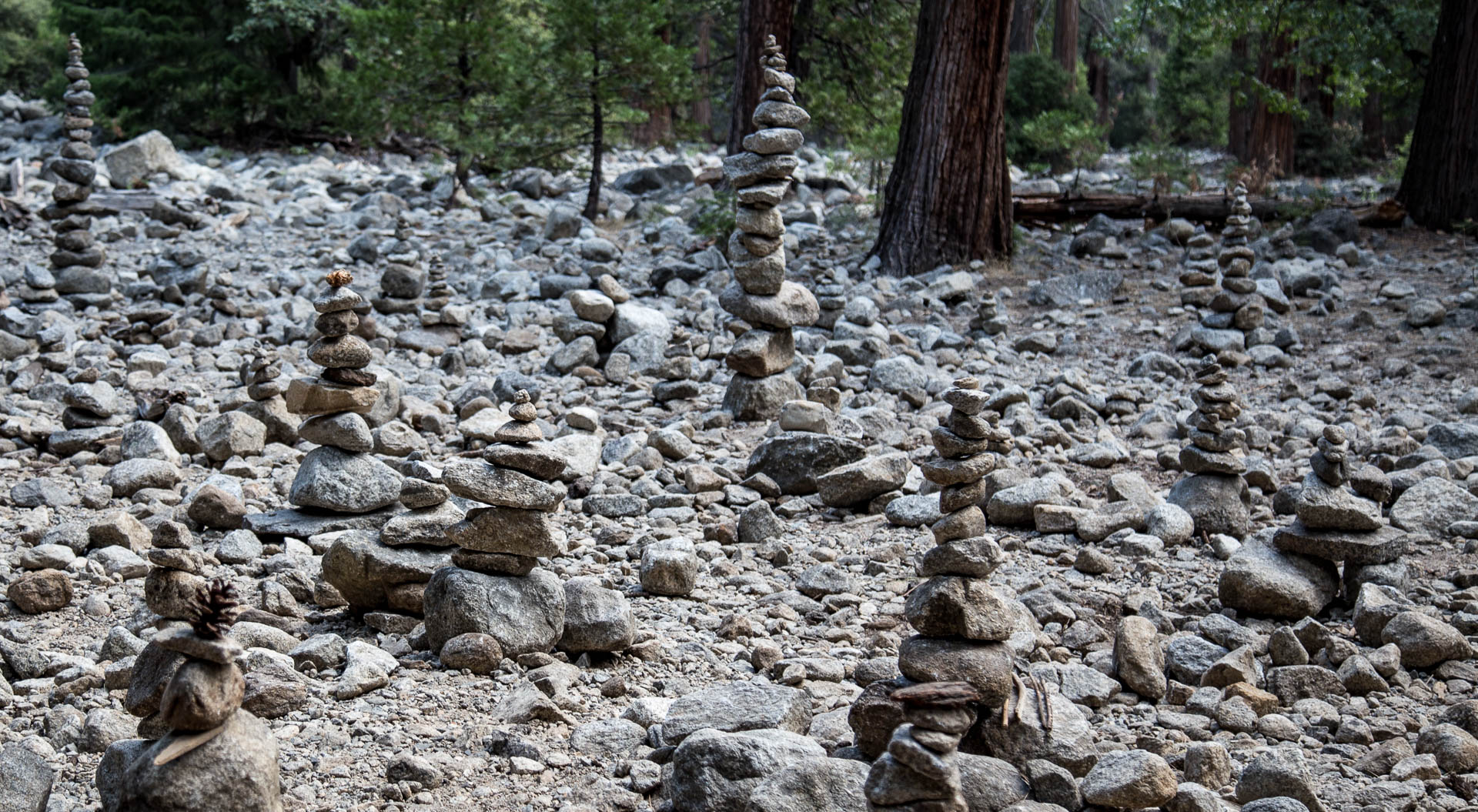 A path leads right to the foot of Yosemite falls and runs next to a dry riverbed with some serious boulders occuring. Some people had taken to building stone towers. 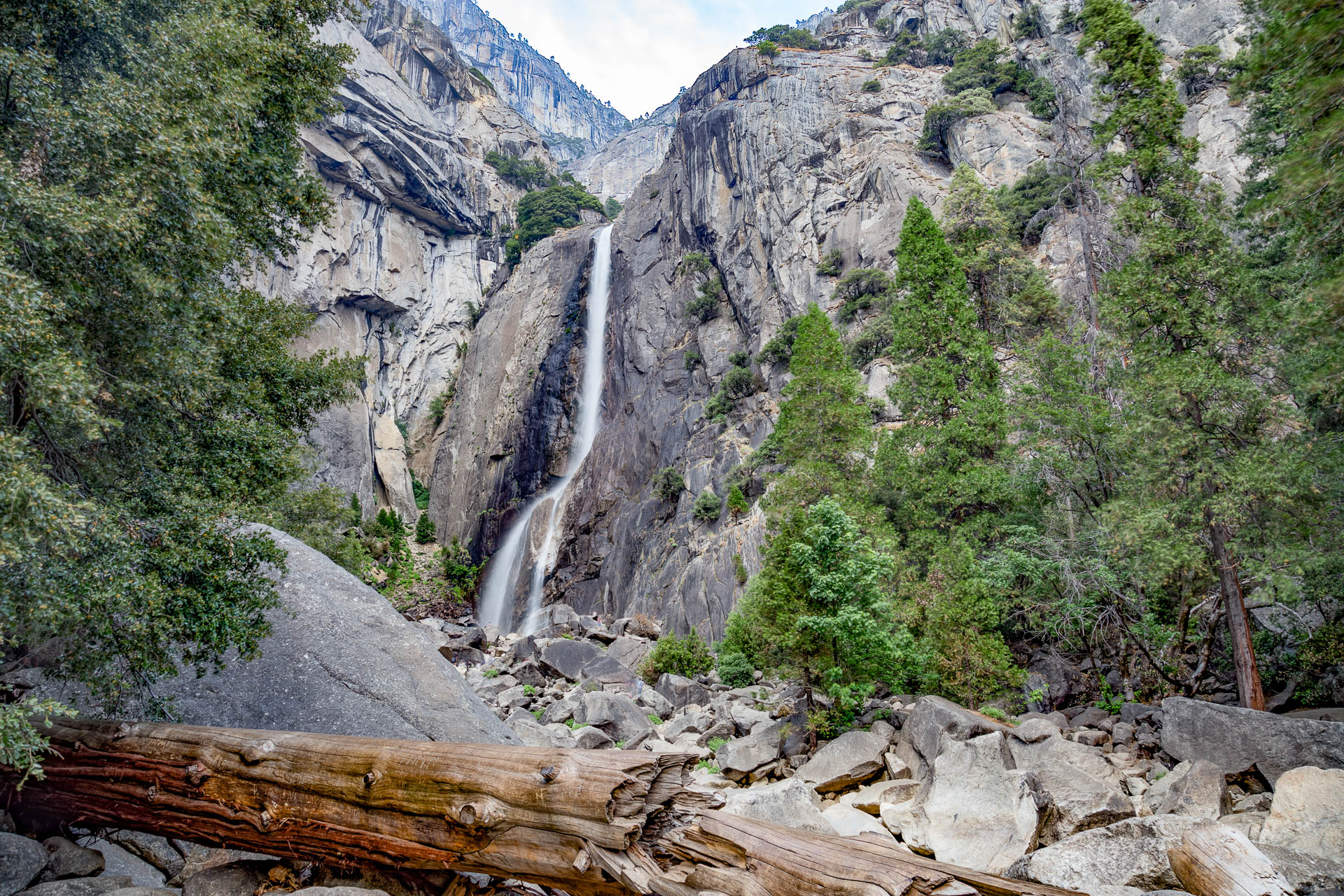 The falls up close were impressive, again a chance for me to get that smooth water effect I like so much. Whilst there Cat made friends with a Californian Ground Squirrel. 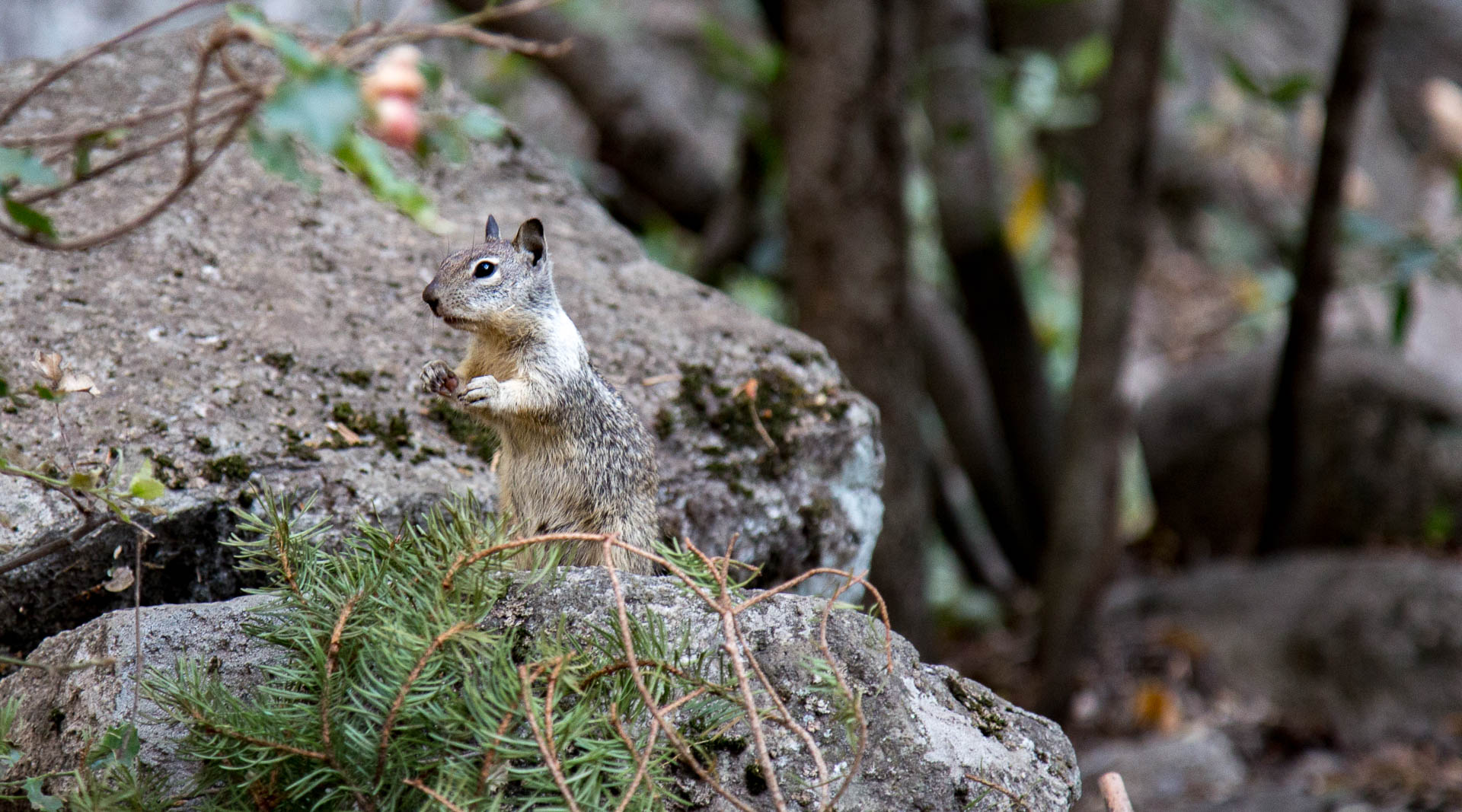 From a distance, the falls are even more impressive. In the Spring I must imagine they are truly a sight to behold. That dried out riverbed ain't there for nothin'!

The evening was now drawing in and providing me with some wonderful warm, golden light across the faces of the mountains around. The lush meadows that line the bottom of the valley only looking more lush in the golden light. 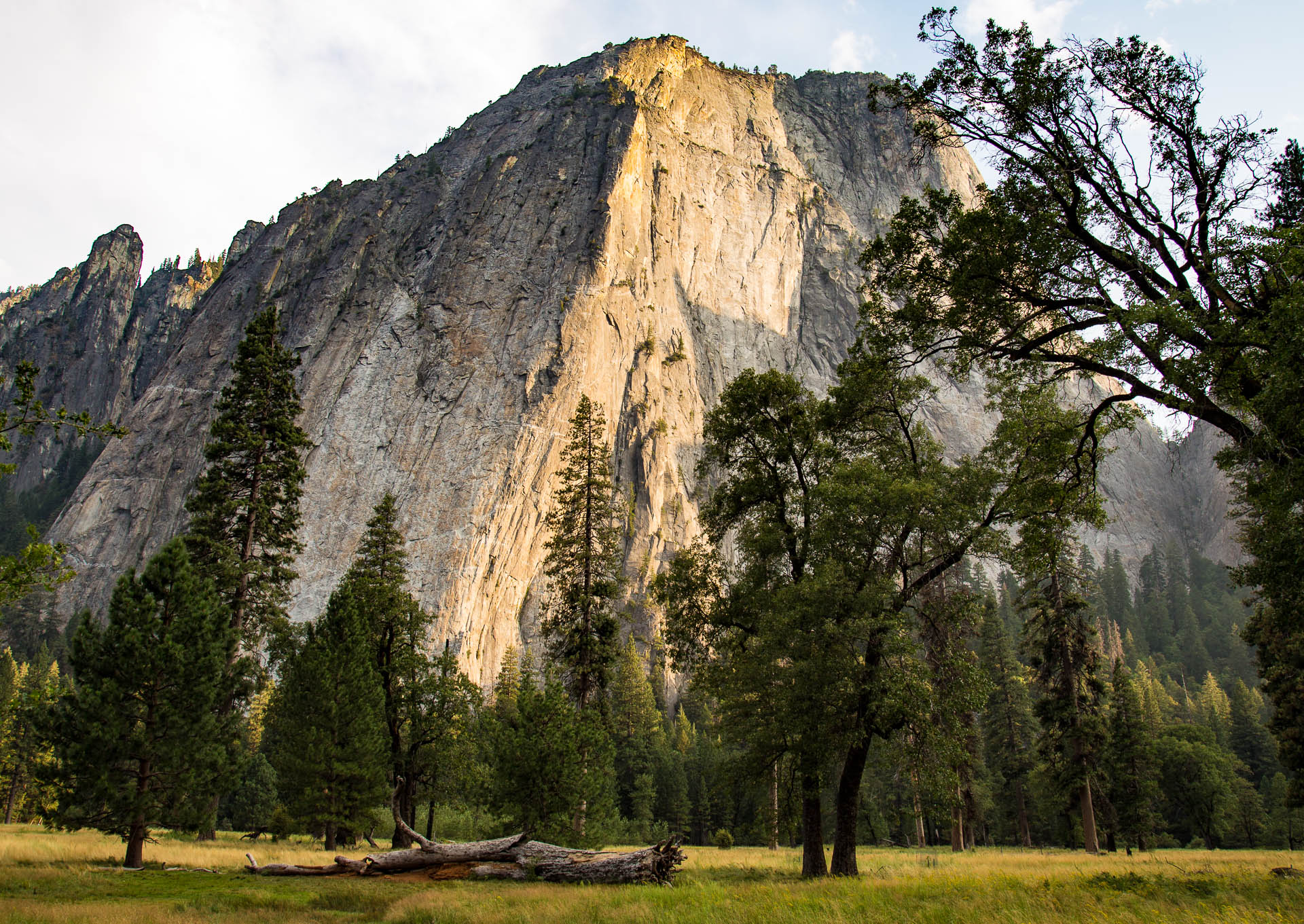 The header image of this post was taken from the same vantage point as this and serves to show the power of optical zoom. I brought out the 150-600mm lens I used at Laguna Seca the other day and focused on the majestic half dome in both shots. The first at 150mm and the one below at 600mm. The gorgeous evening light really making this quite the spectacle. 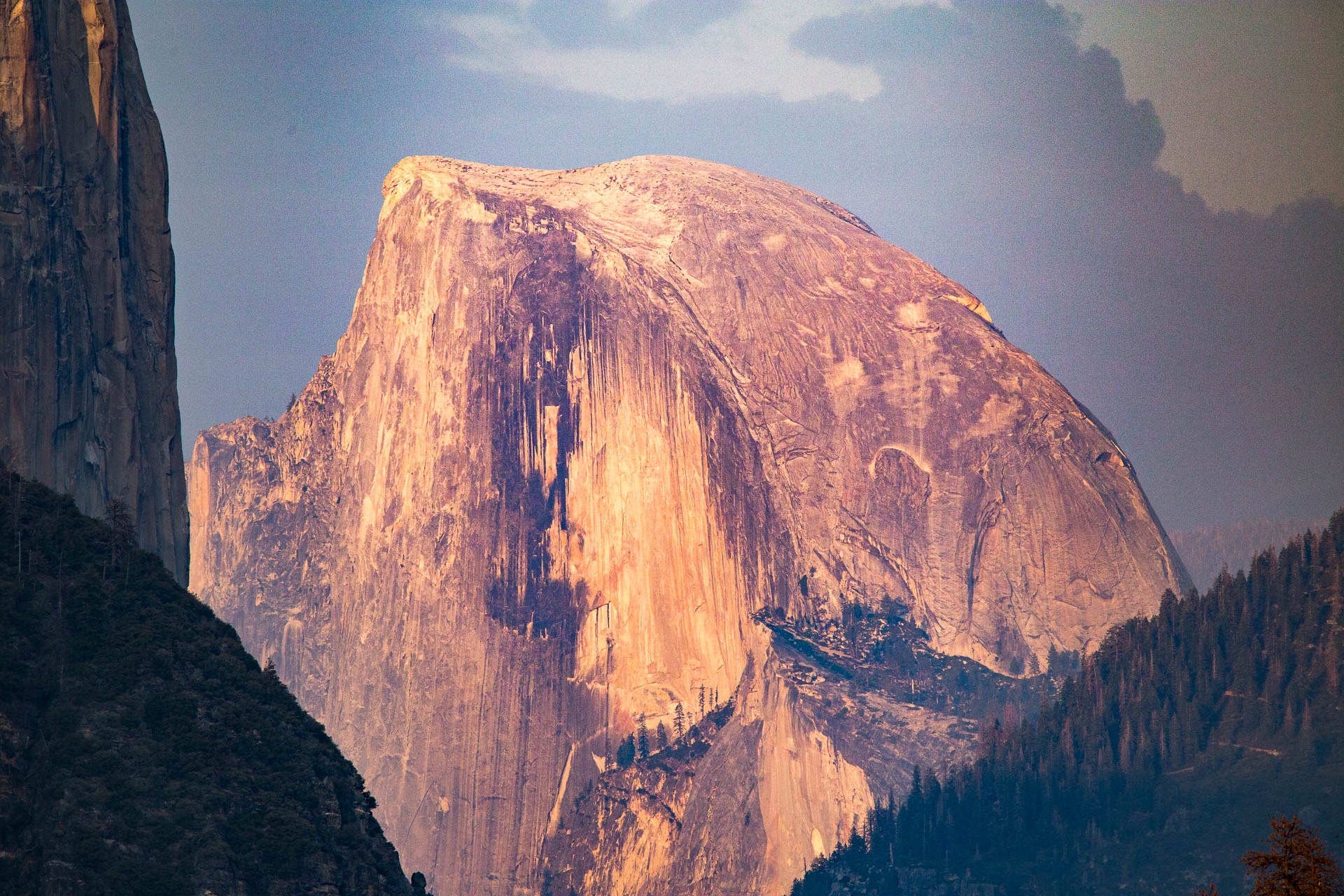 Sadly, we'd left it a bit too late to make the 1hr drive up to Glacier point where all the Instagrammars get their selfies. This was a shame as it looks stunning in all the guide books etc but ahead lay the Tioga pass en-route to our overnight accomodation in Mammoth Lakes and I wanted to see it in some semblance of daylight!

On our way out of the park we saw a real life Bear!!!. We were both grinning for ages after that. Boy can they move!!

We saw most of the pass on the way up in half light. A lunar-esque landscape of 'melting' rock with a sprinkling of trees. Hard to describe and almost impossible to photograph at that time but take my word for it, worth the drive. 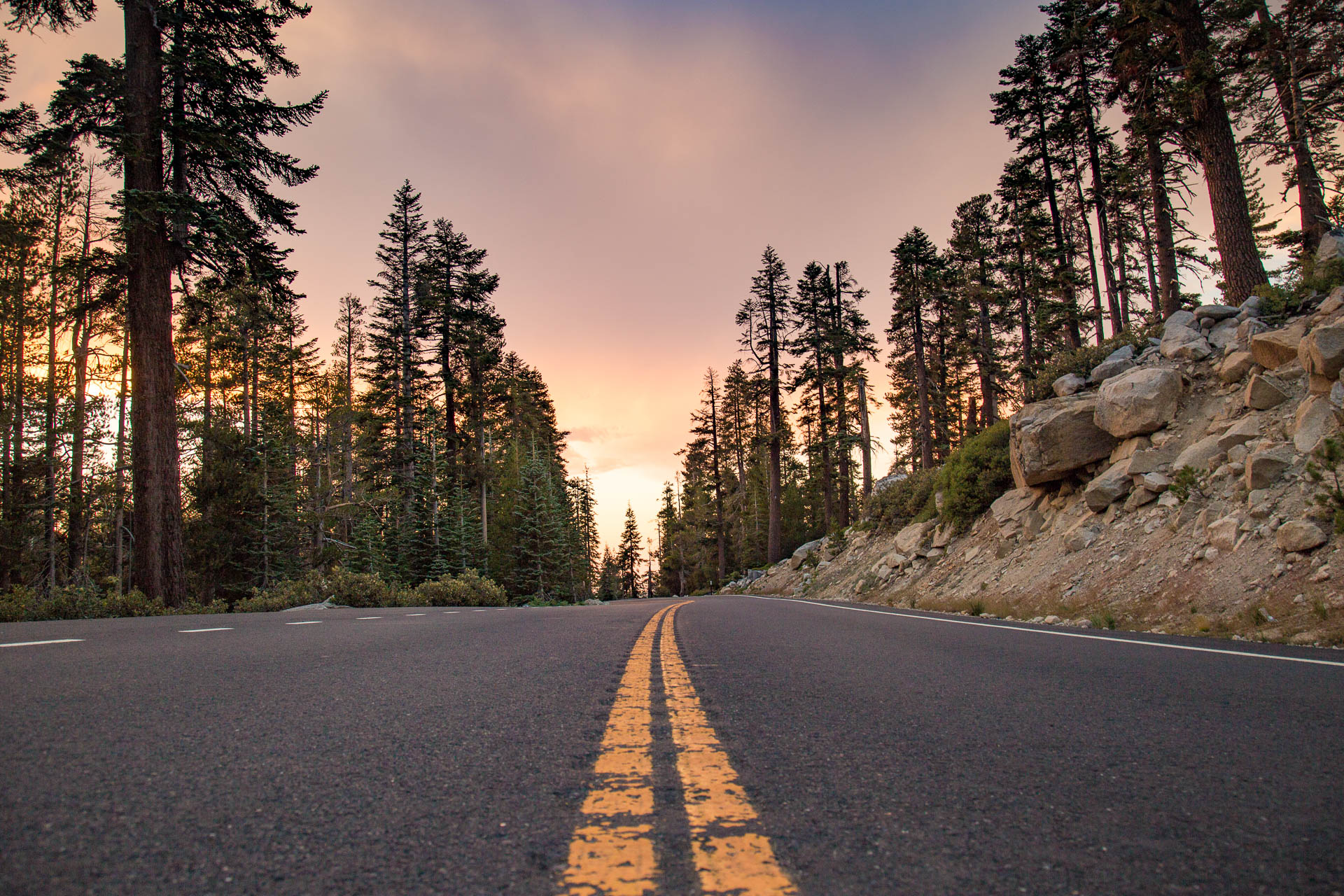 The pass tops out at just over 3,000m (9,943ft) without a single hairpin bend or even a particularly steep section. Quite the feat of road building. Once at the top I stopped to marvel at the darkness around, true darkness. Not the darkness you get in Kielder or Wales or even North Norfolk. Just dark. Like I've never tried to photograph before. 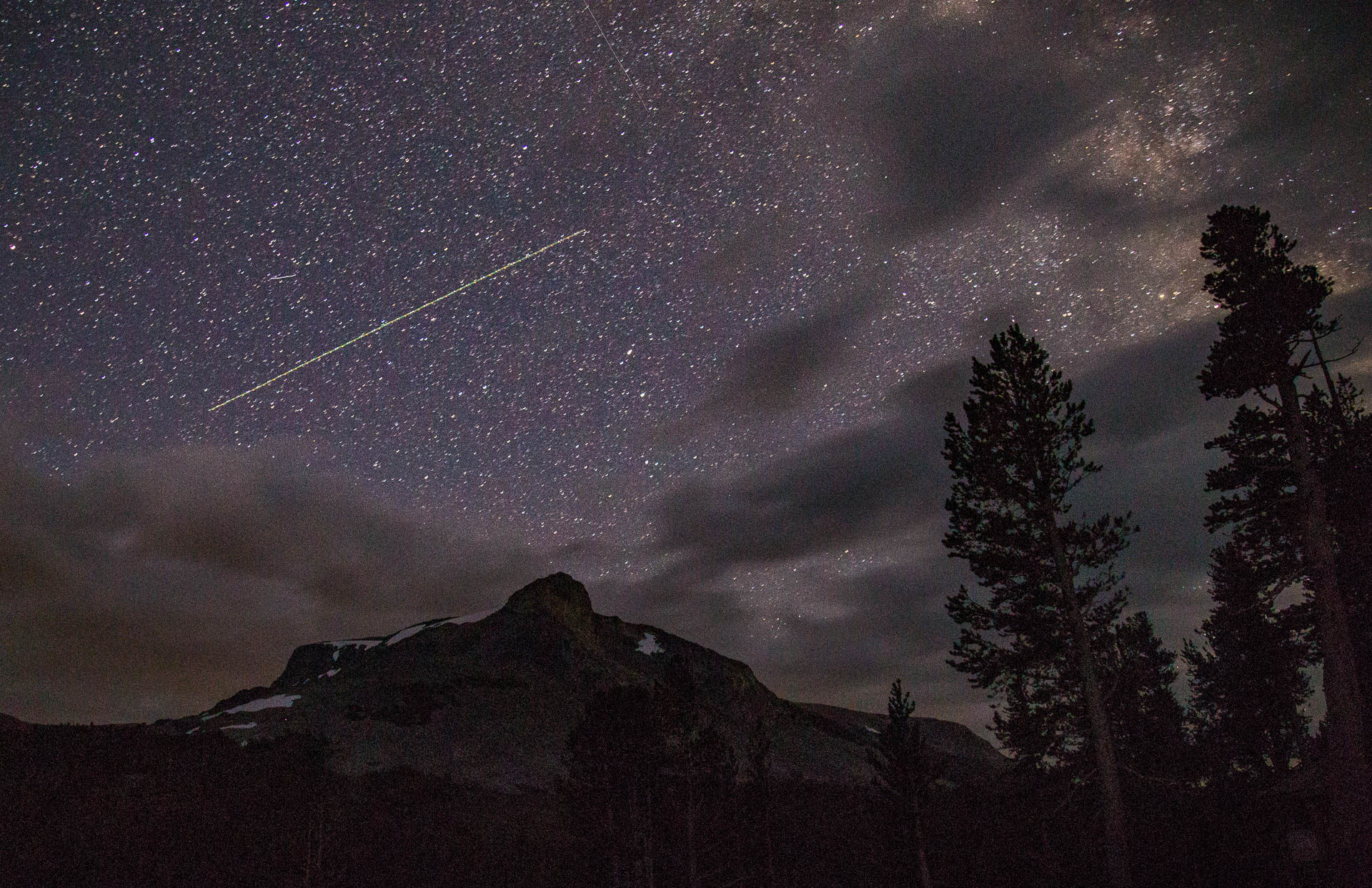 It took me a full 30 minutes to get the settings right without too much noise and the clouds looking pleasing before I was happy. Yes, that is a satellite ruining (or adding too?) my shot! We continued the 40 minutes onwards to our overnight bolt hole in Mammoth Lakes at just a smidge over 2400m it's pretty darn high. There are some serious mountains around here topping out at over 4000m and this isn't even the Rockies proper!

A half day is nowhere close to being enough to 'do' Yosemite but Cat and I both agree we liked it so much that we will be back. Possibly to partake in some wild camping!

As I said at the start I'm feeling the effects of the altitude but tonight we are staying on the other side of Death Valley which is a much more Alex friendly 1100m or so. Looking forward to a decent nights kip and some more stargazing in the pitch black of the mid-west. 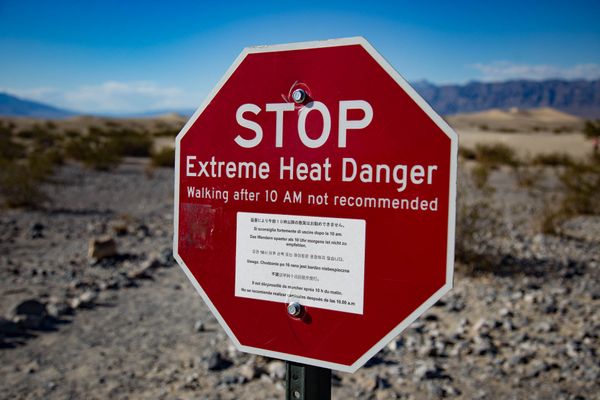 Day 9. Words fail me but I'll try anyway. 49C. That really is hot. That was the maximum temperature recorded by the car in Death Valley today. We continued our 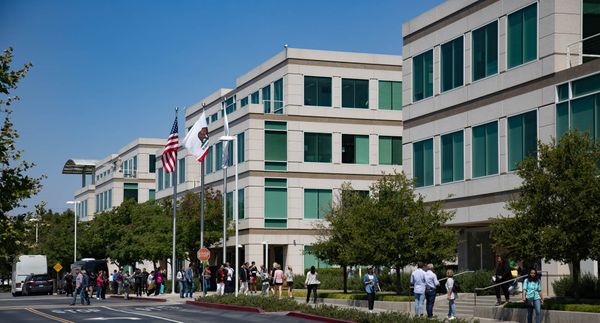 Day 7. So much of my world is dreamt up in these few square miles, actually being here is almost daunting. Where to begin? What to see? In actual fact,