Leaving DC behind we predictably did so in the lashing rain early Sunday morning. We headed along I-66 toward the (supposedly) beautiful Skyline Drive overlooking the Shenandoah valley. Alas, the weather was absolutely terrible and we opted to skip Skyline Drive and head for the northern entrance to the Blue Ridge Parkway instead. 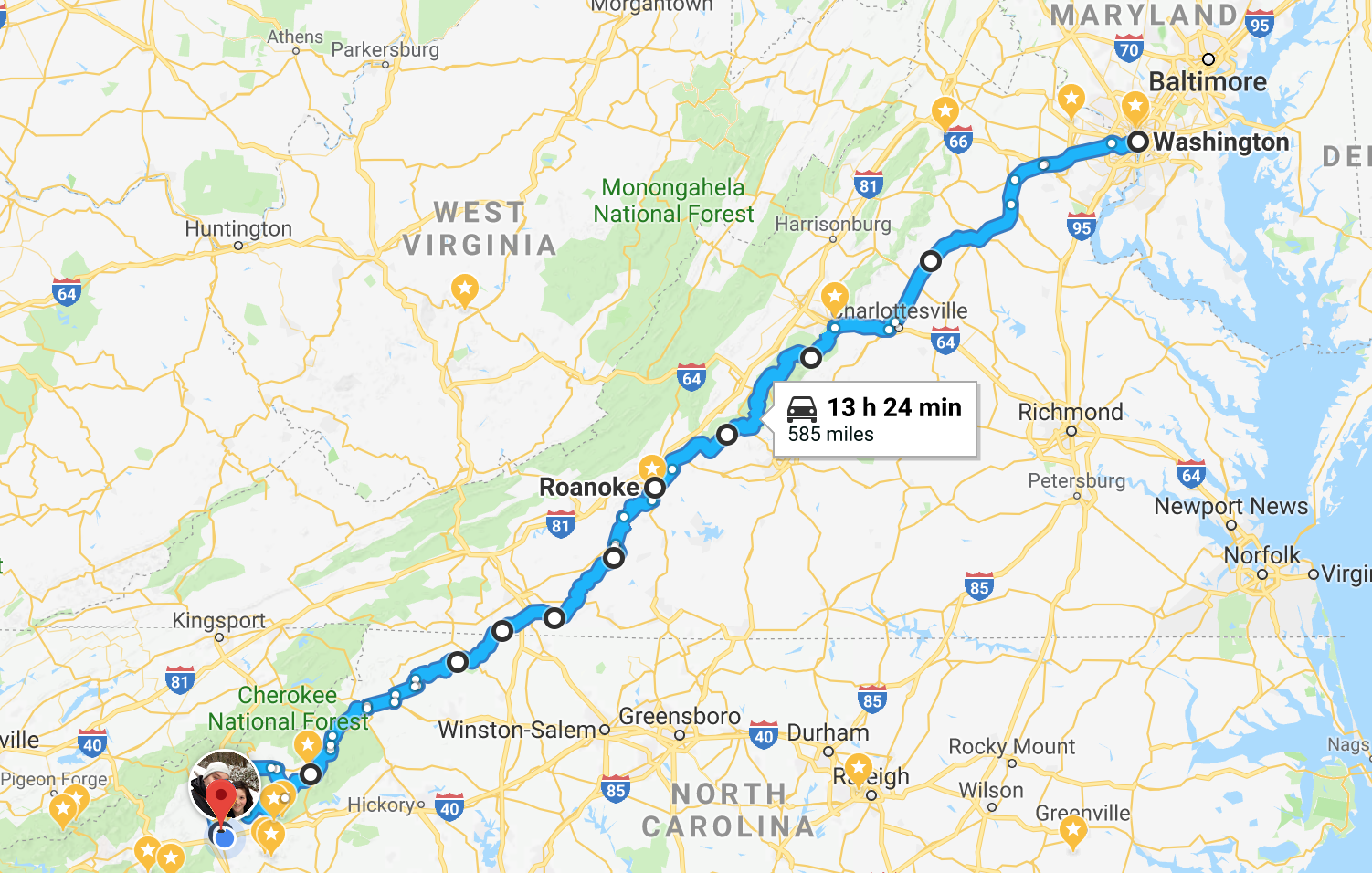 Our detour took us through Madison, VA. The area was popular with German settlers over the years and we partook of some thoroughly delicious food at The Bavarian Chef. I had a Wienerschnitzel and Cat had some Goulasch. It was oddly surreal to eat food in a convincingly Southern German / Austrian themed restaurant, where the staff wore traditional dresses and lederhosen, in Virginia. Only in America?

We picked up hire car number 3 for the trip on the way out of DC as well. Our first car, the Ford Edge was an SUV. The driving position wasn't all that comfortable and I don't like cars that wallow - I normally drive a Golf GTI after all. I like sportier cars OK? It's not just a tin box on wheels for me, it's a thing I get great pleasure from and I can be (more than) a little picky!!

We swapped at Raleigh airport last week for a VW Passat 'R-line'. Now, Golf R's are 290bhp 4 wheel drive beasts so I was expecting a rocket ship. The Passat 'R-line' only comes with 170bhp though so I was a little dissapointed! Still, plenty fast enough for a hire car and it didn't wallow so much. It had great luggage space and I really liked being able to chuck it into corners more than the SUV.

<vw rant> I'm kind of dissapointed in VW for slapping the 'R' badge on this car, it really cheapens that brand. They're doing this with the GTI too, slapping that badge on Polos and all-sorts now. These sorts of badges and reputations are hard to come by! I'm still seriously considering a Golf R when we move over here though despite this. What a hypocrite! </vw rant> 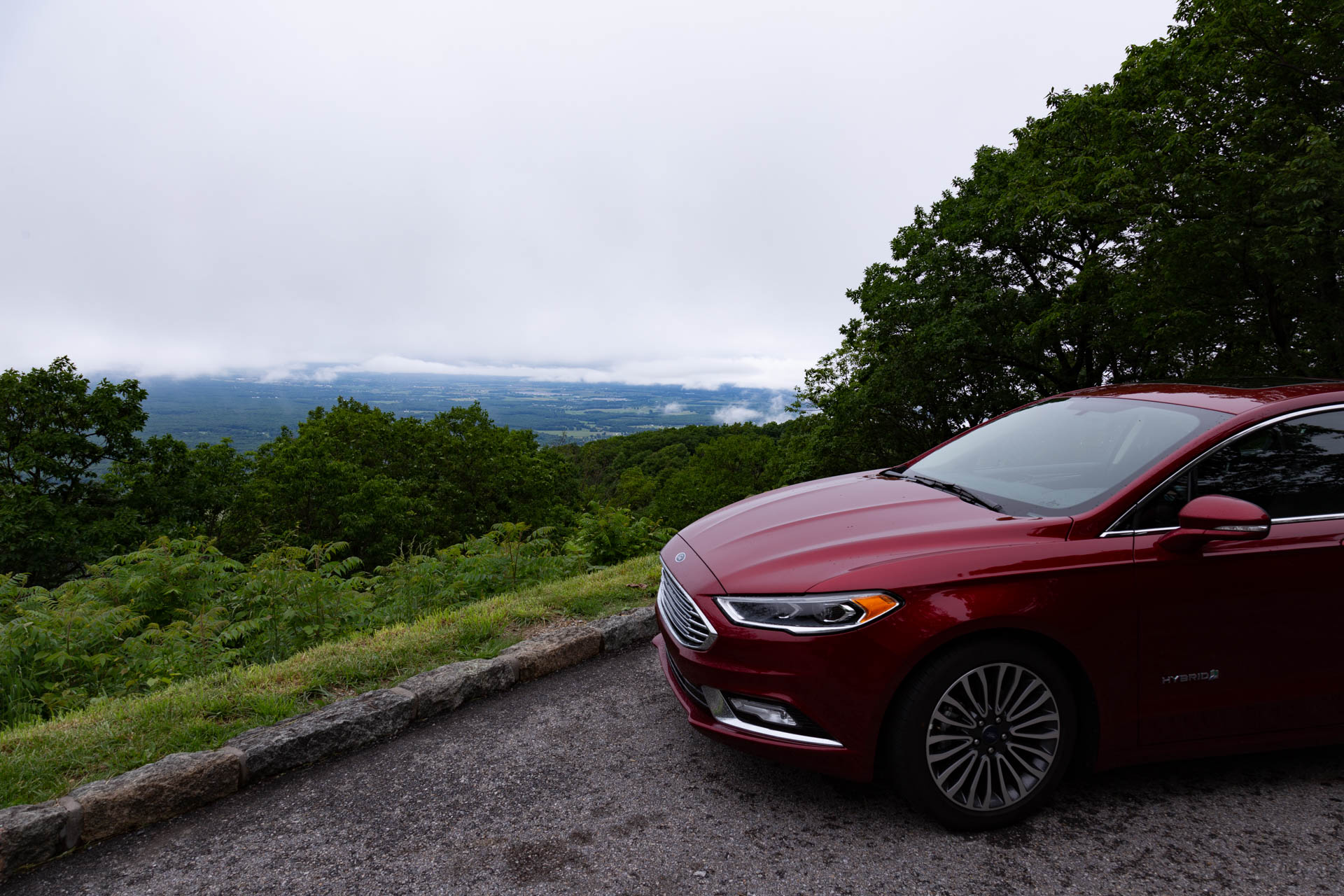 We ended up having to switch it out again though, the 12v sockets in the car didn't work. Given that I rely on them to charge my various gadgets on the road, this was no good. Drones, cameras, phones - they all need juice. We swapped for a Ford Fusion which looks suspiciously like a Mondeo to me. It's a hybrid which is new on me and we're actually getting fantastic MPG out of it - 45MPG. Not a patch on my 2.0TDi Golf in the UK (which routinely got 60+MPG) but still, fun to play around with. Electric vehicles are the future, bring it on I say! 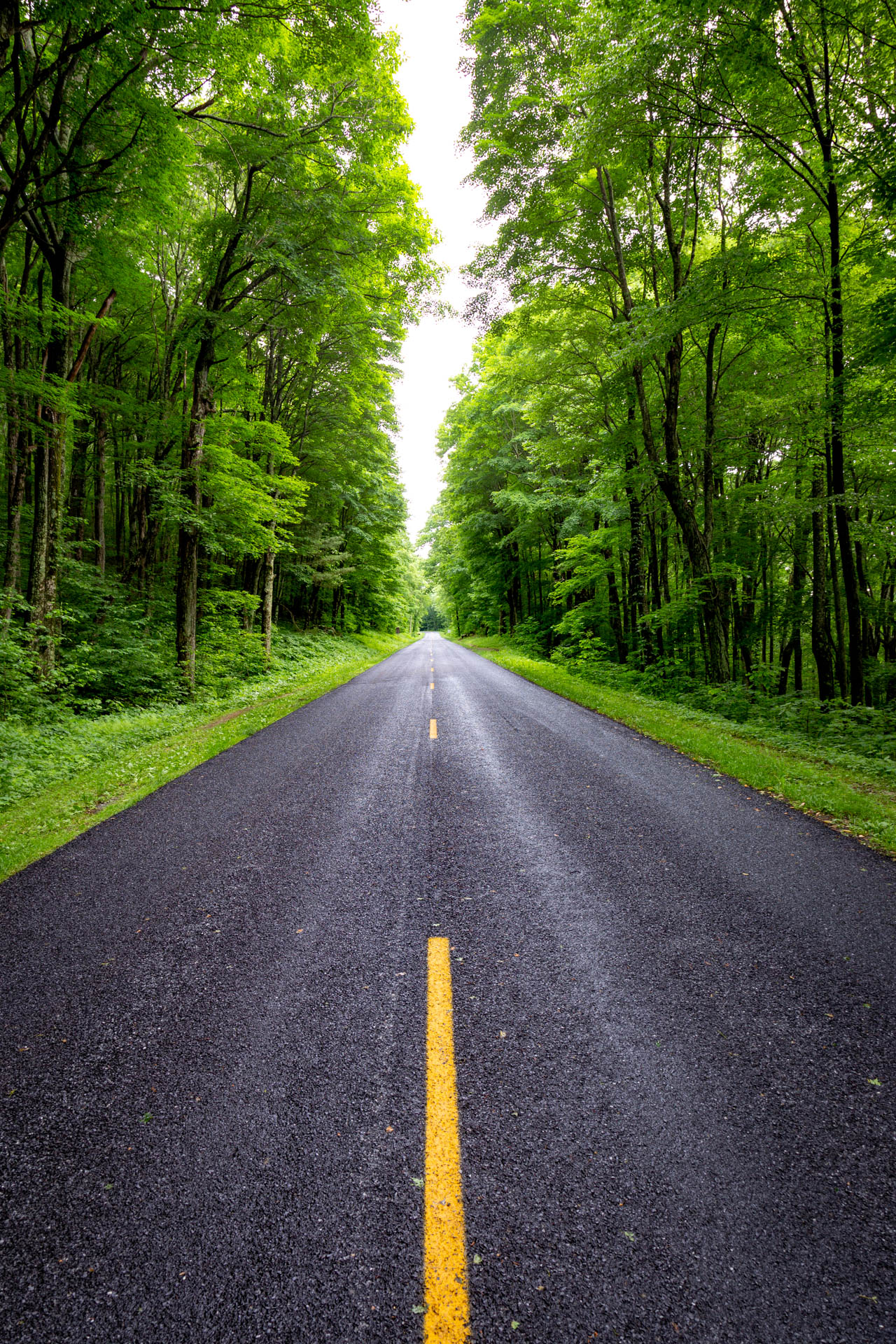 The Blue Ridge Parkway is billed as one of America's "Great Scenic Drives" and it lives up to the hype. 469 miles long, without a single stoplight it links Skyline Drive (Shenandoah National Park) with Great Smoky Mountains National Park. It is a National Parkway but is operated and maintained by the National Parks service. We found it a truly amazing thing to exist. The Parkway feels isolated, in the best way, from the world around it. No homes or businesses face directly onto the parkway and any junctions are dealt with by means of a bridge and on/off ramp.

It was built in the depression of the 1930s as a way to generate employment for 25+% of unemployed workers at that time. The parkway as we know it today took some 52 years to complete with the final stretch at Linn-Cove viaduct being completed as late as 1987! 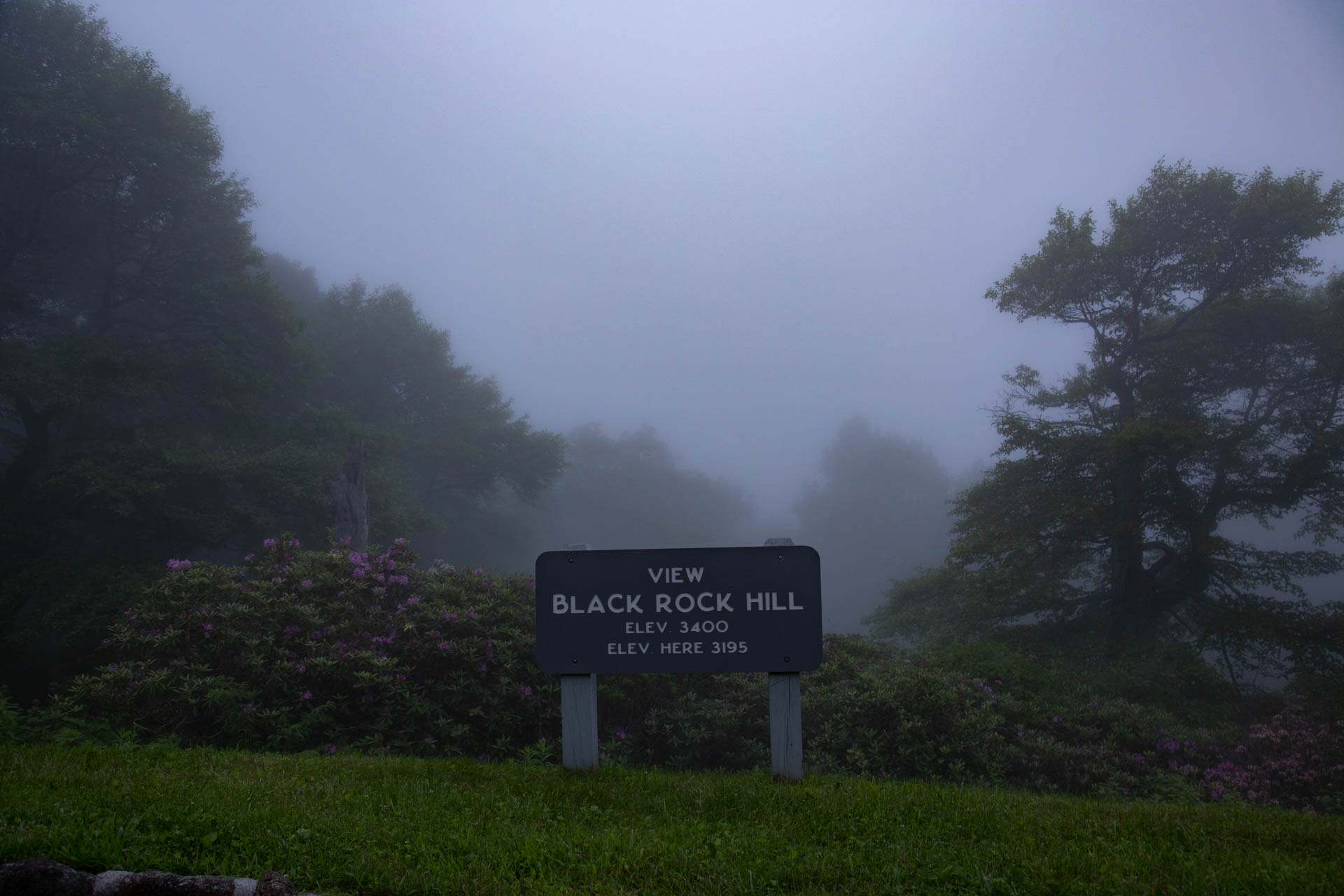 The first few miles of parkway we could see absolutely nothing. At times only a few meters ahead even! However, the mist was slowly lifting and afforded us some spectacular lighting conditions along the way.

We plowed on until we reached Roanoke where we found a hotel and stopped for the night. The first hotel we pulled up at was a Ramada in a rather less than solubrious feeling part of town. The reviews didn't let my Spidey-sense down. "If you like hookers and crack, then this is the hotel for you!". We high tailed it out of that neighbourhood and headed toward the airport finding a Best Western which did the trick. Early next morning, the rain had gone and finally we had some proper sunshine and good weather. Hallejuah!! 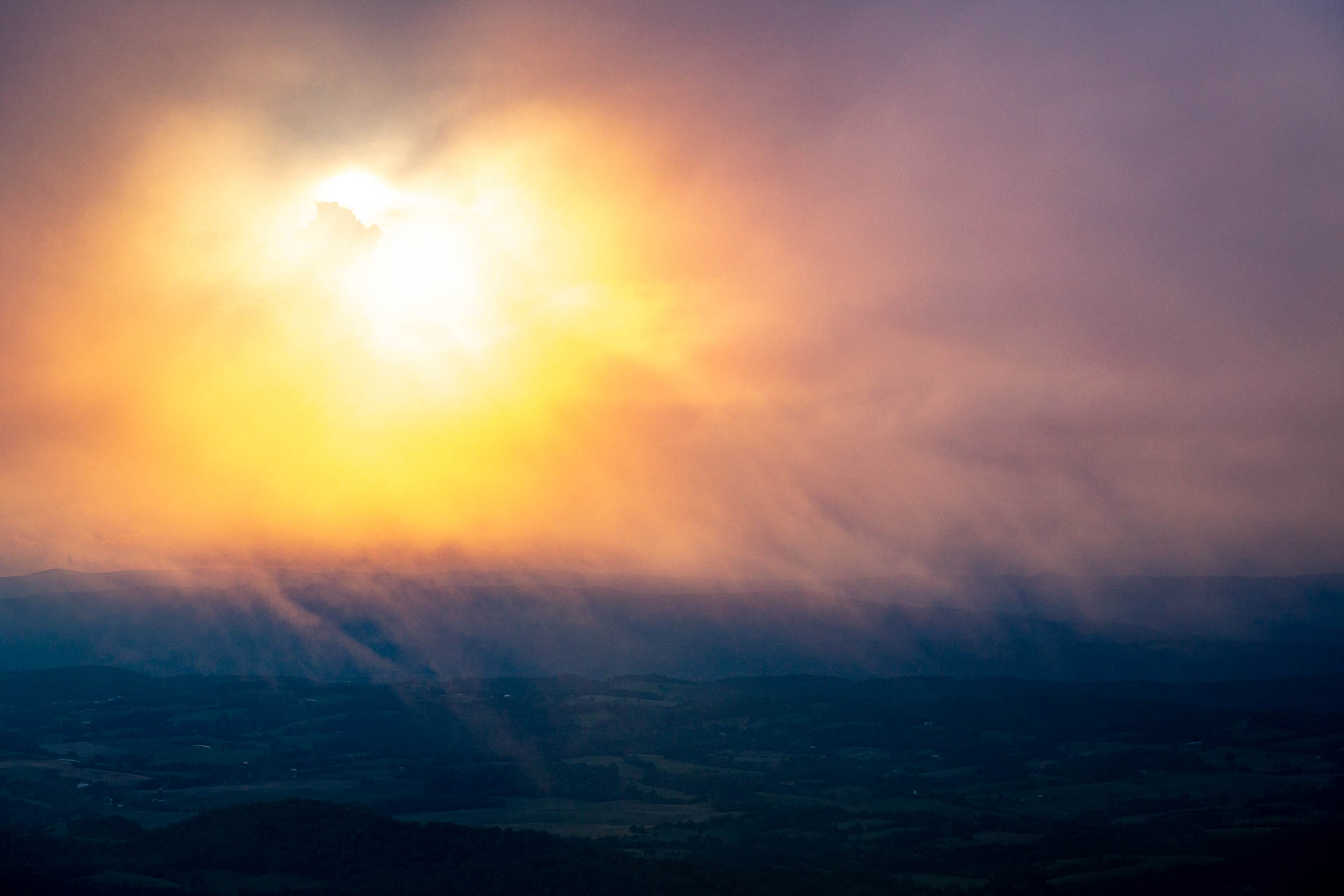 "You feel like you're on top of the world up here."
- Cat 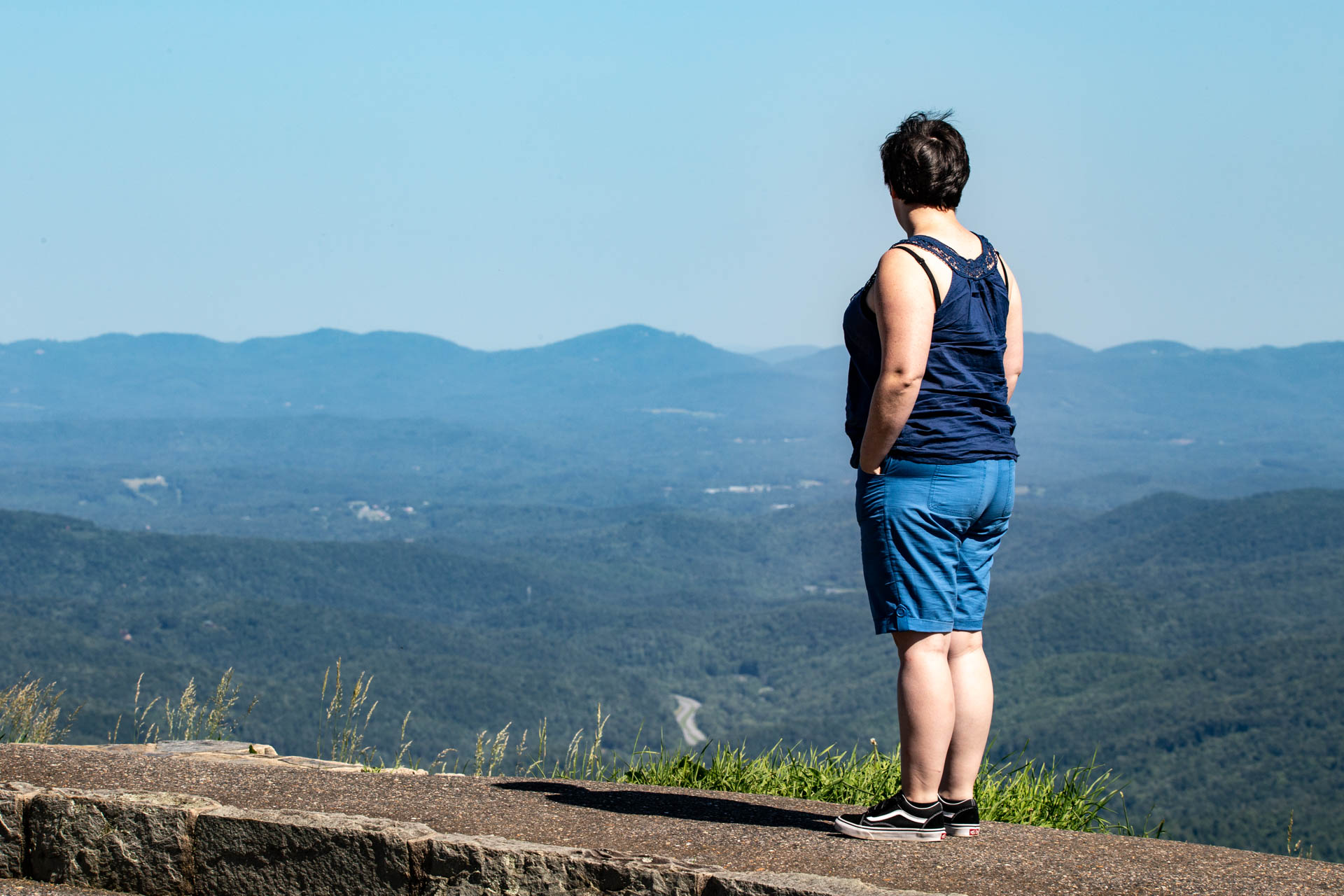 Thomas Heaton is one of my favourite YouTubers, a landscape photographer who has a much slower, methodical approach to his craft than most (myself included). He's the sort of chap who just likes to be outside and photography gives him an excuse to do that. One of his mantras is that it's all too easy to rock up to a huge view, put on the widest lens you have or take a panorama and move on. 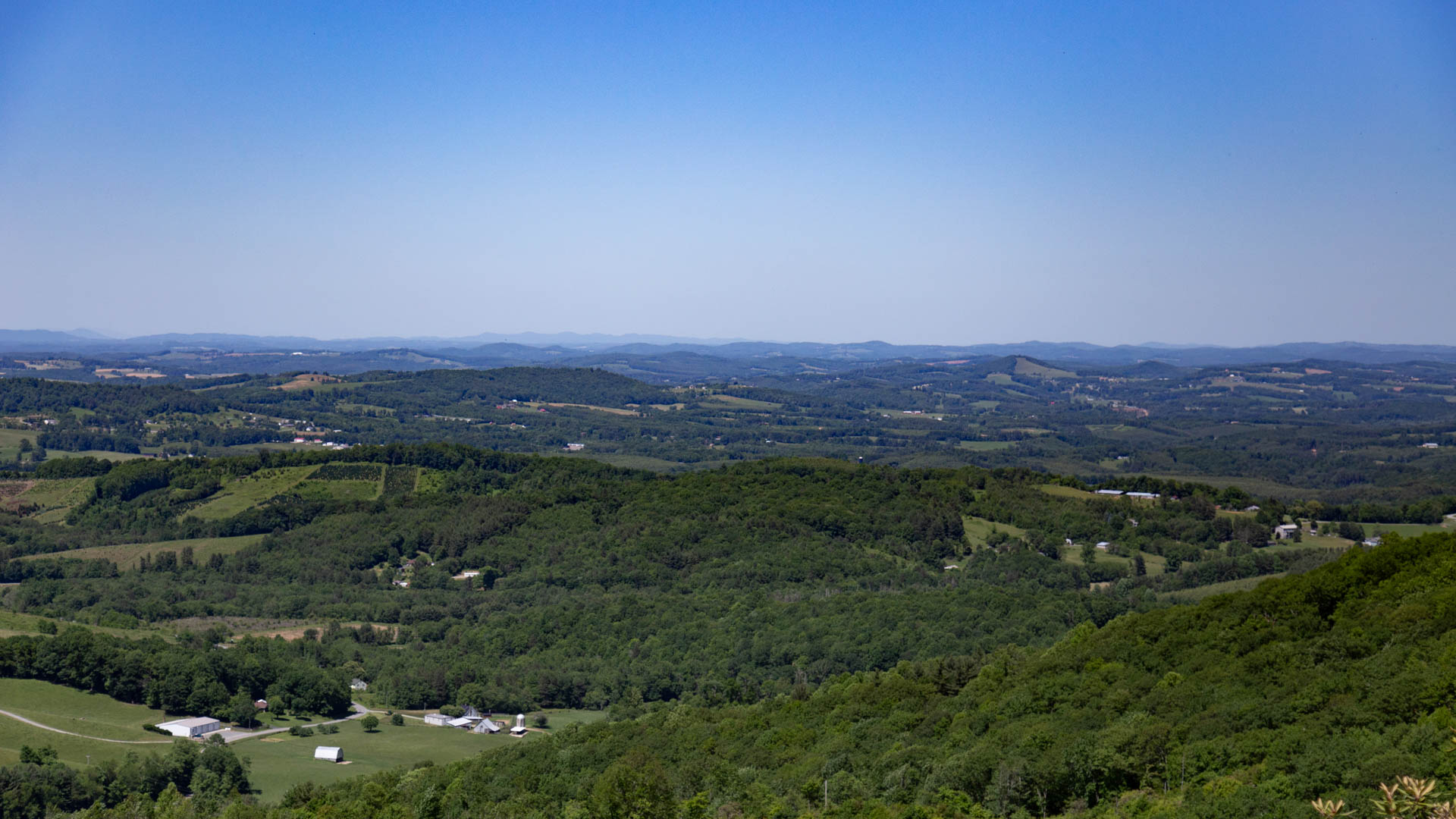 This image is beautiful but boring isn't it? Of course it's stunning with the naked eye as you can pick out details within the vista, drink the whole thing in or just sit and loose yourself. The camera though, sees things differently. Following Tom's advice I've lately started picking out details with a zoom lens instead of / as well as getting the wide shot with a panorama or a wide lens. 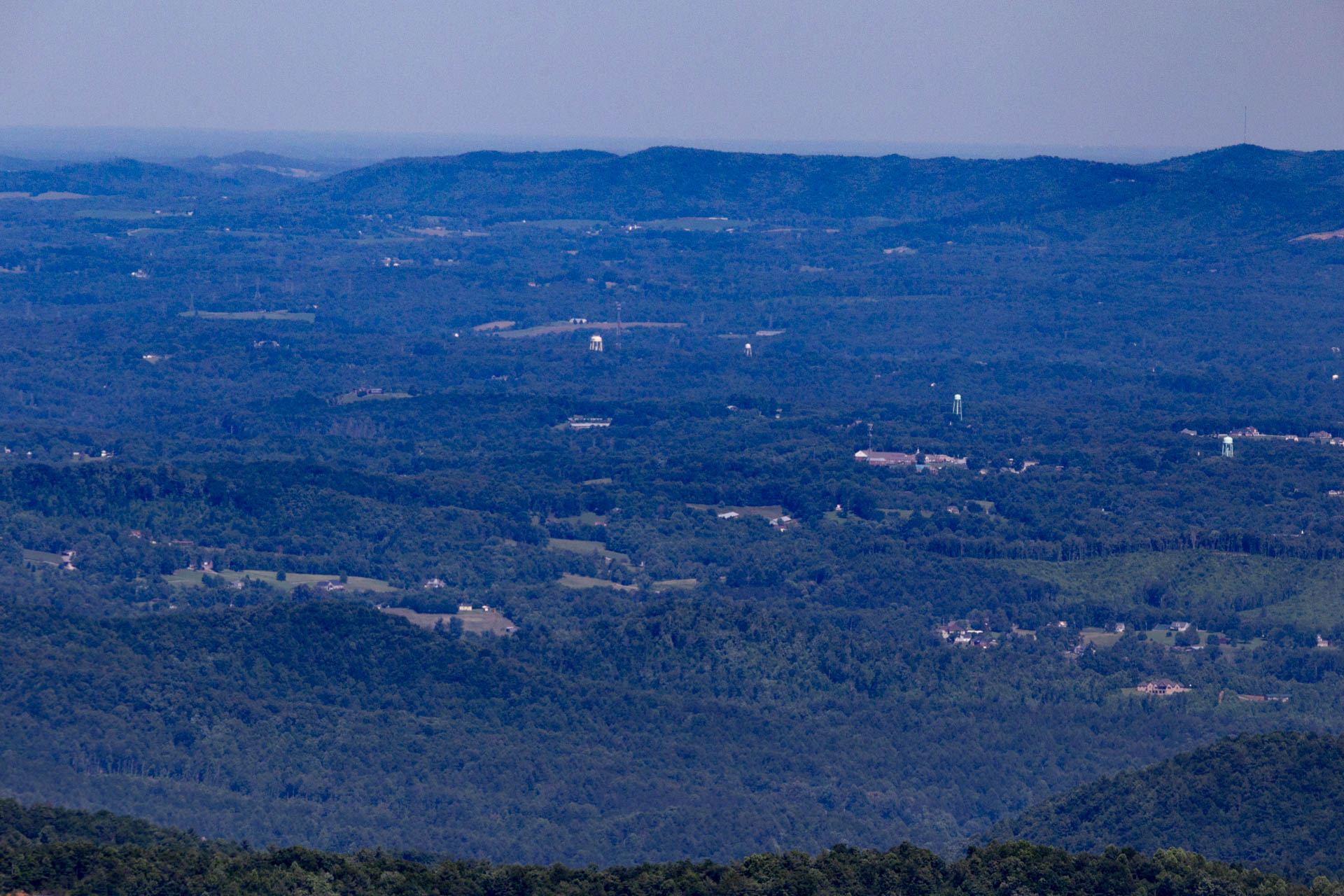 After a while searching around, I picked out some interest in the valley below at 600mm with my zoom lens. The water towers stuck out marking the communities below. Hardly a portfolio image but I found it an interesting exercise and will be repeating it more often in future. Image composition, an endlessly fascinating topic!

Here's another example where I scouted around from a different location. I found a view with a house and a ridge of trees in front of it that was lit up with a shaft of golden sunlight. 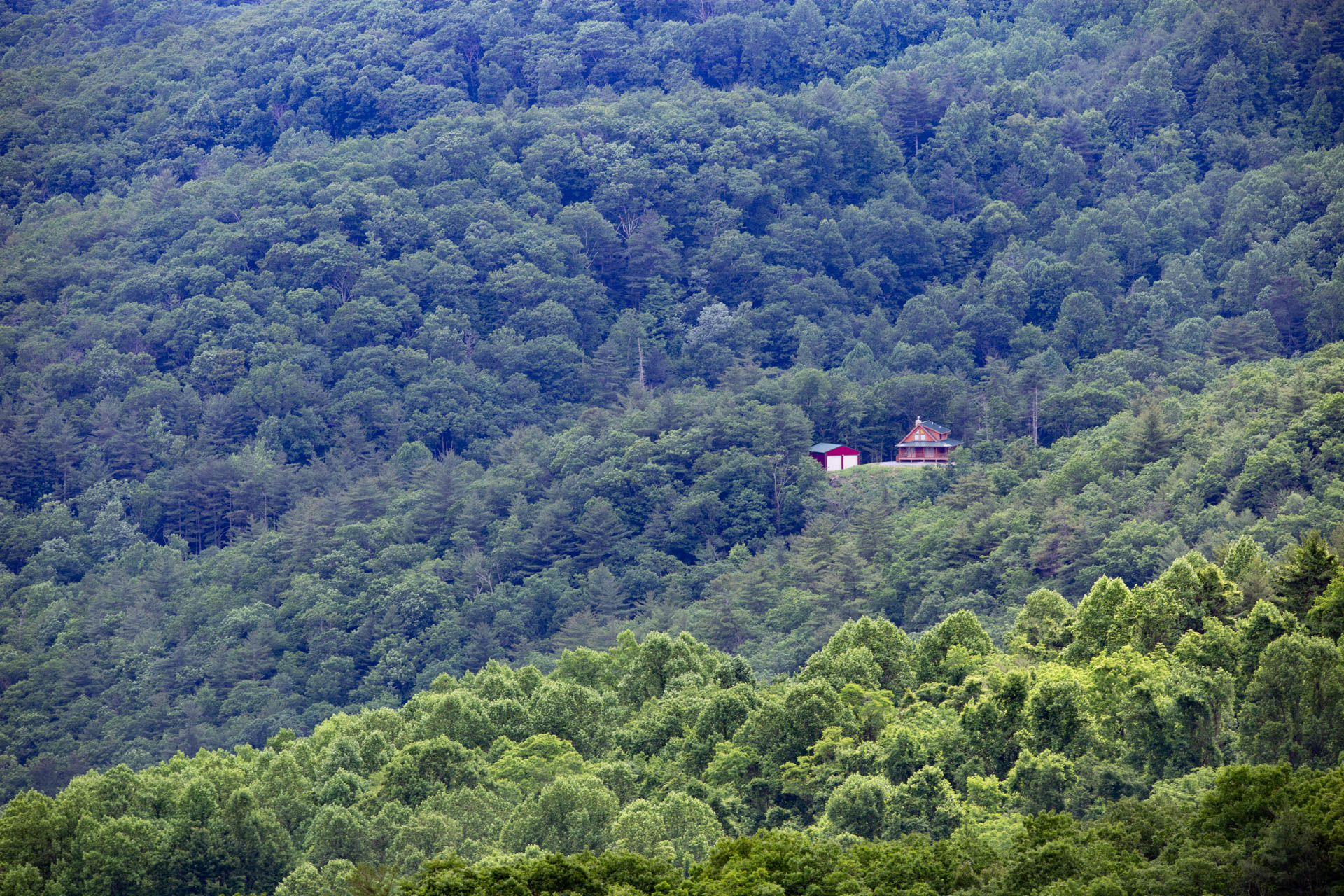 DC - Roanoke took around 9 hours, with the detour and weather taken into account. A further 9 hours from Roanoke saw us into Asheville or at least it should have done... More on that later. 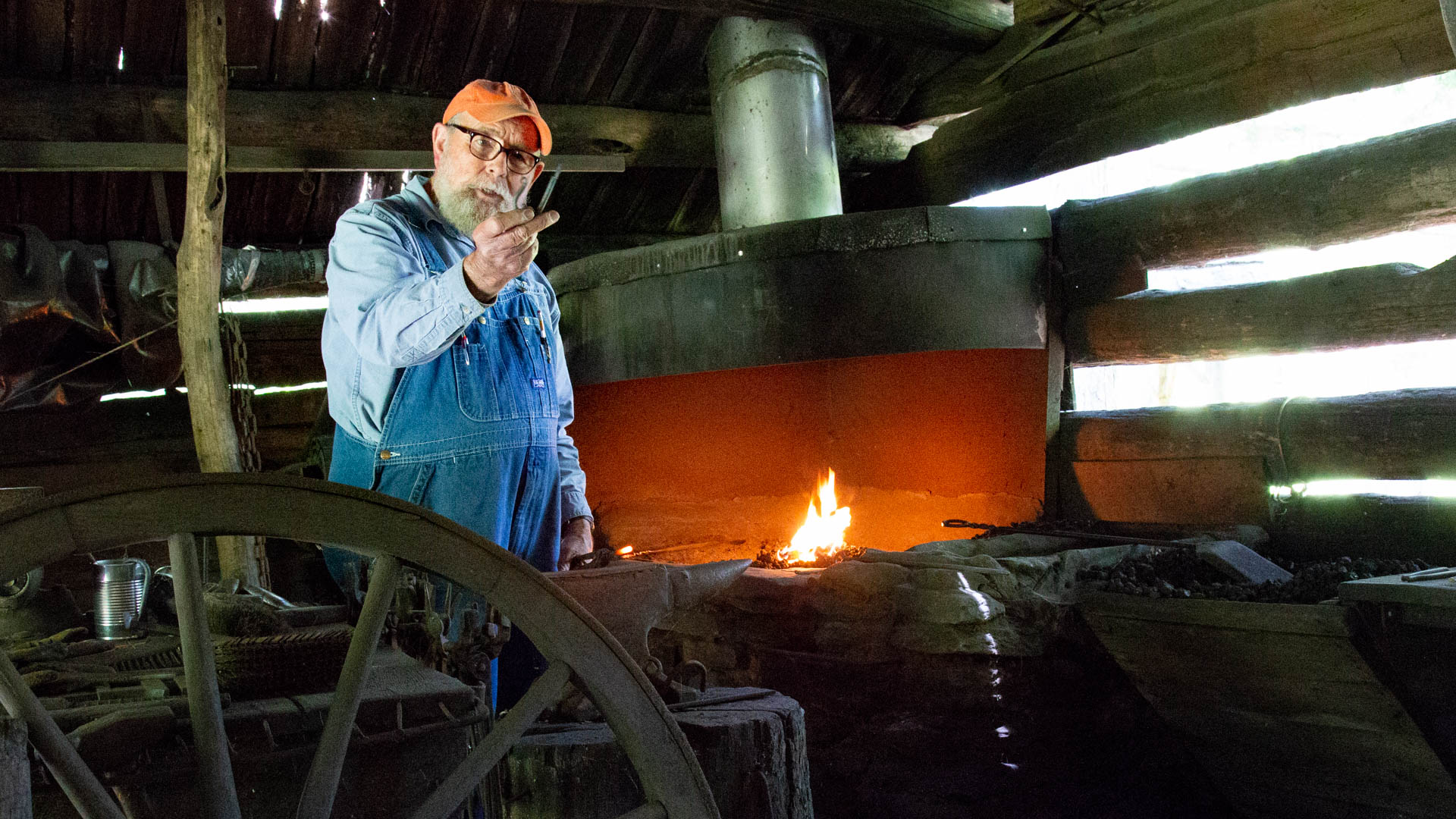 Mabry Mill, one of the only structures directly attached to the parkway along its entire length! It was built before the Parkway though, so we'll let them off. A blacksmith was on duty to regail the kids present with tales of old. I was really pleased with this image as the light inside the hut was really low and I need a long-ish exposure of 1/30 of a second to get enough light into my camera (and show some motion in the flames). Somehow the gent in question posed beautifully still at just the right for a wonderfully atmospheric shot. 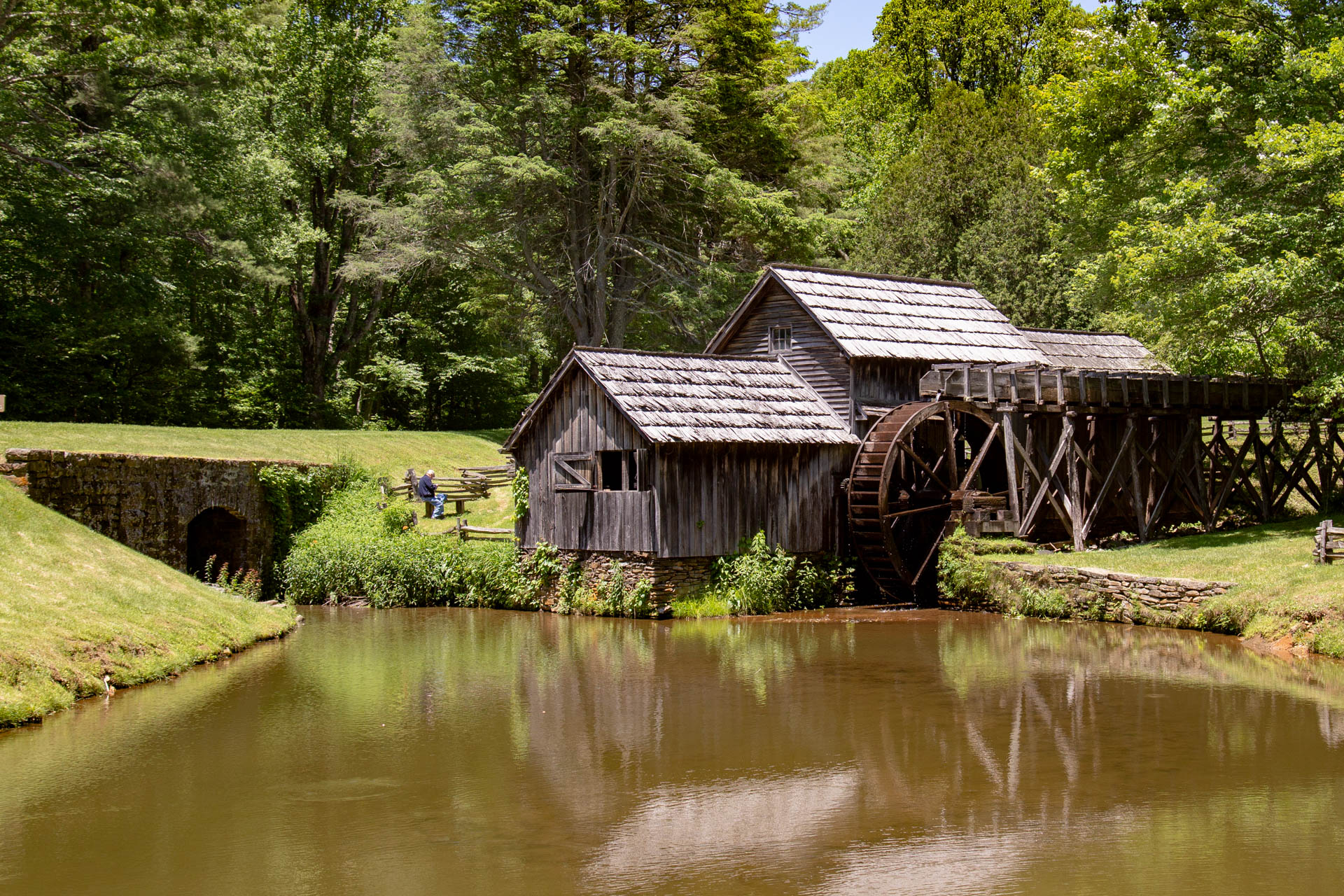 Mabry Mill is the most photographed location on the parkway, this one was almost too easy to get (therefore a cliché!) and the midday light is a bit harsh. I nearly didn't include it. But it is charming so I thought why not. 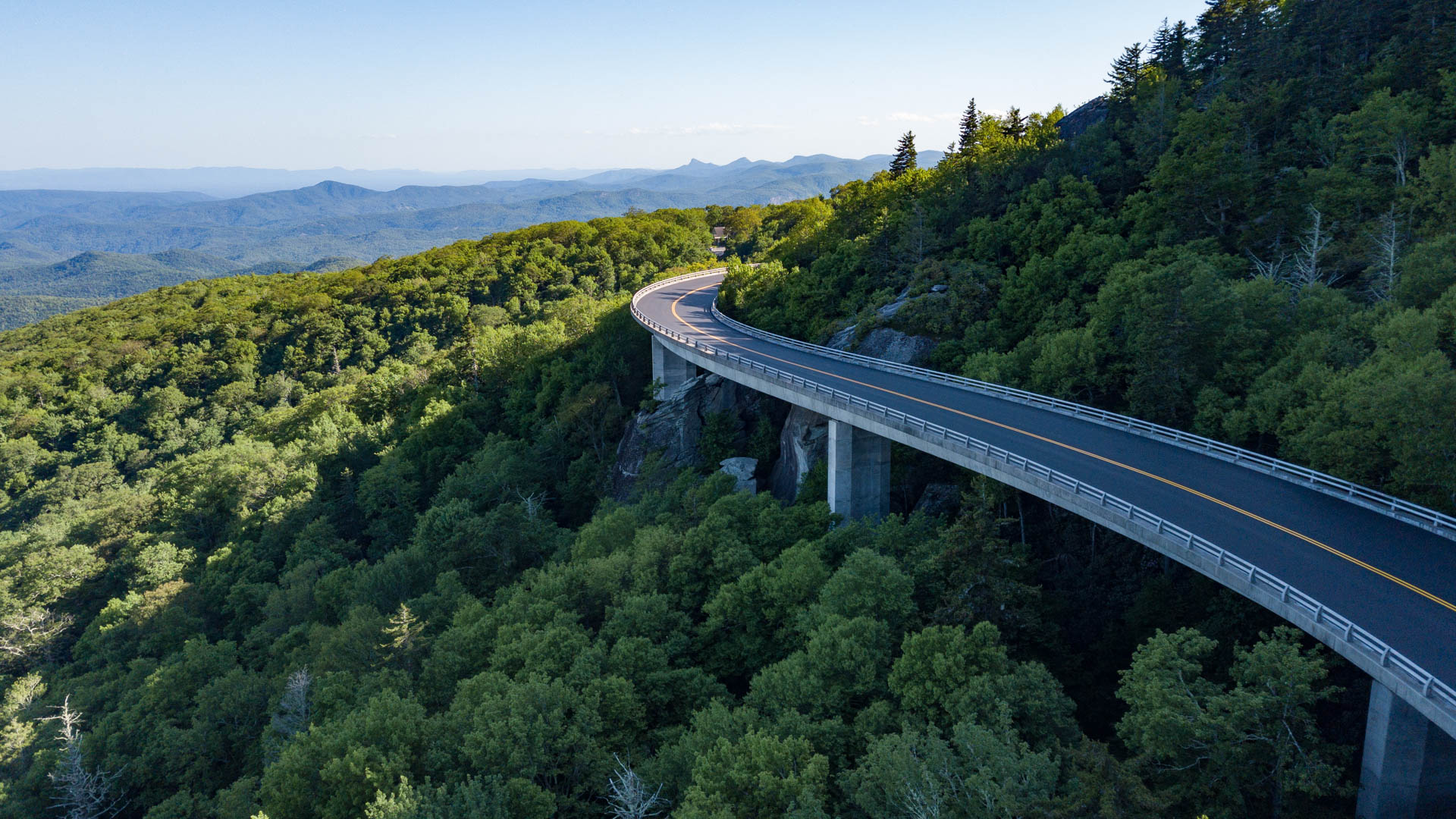 A really stunning piece of engineering to behold. This is the most famous image of the parkway at Linn Cove Viaduct. I'd love to return in the Autumn and catch this place at sunrise so it's not covered in shadow. We got lucky on this visit though as it was recently closed for resurfacing and only reopened last week! 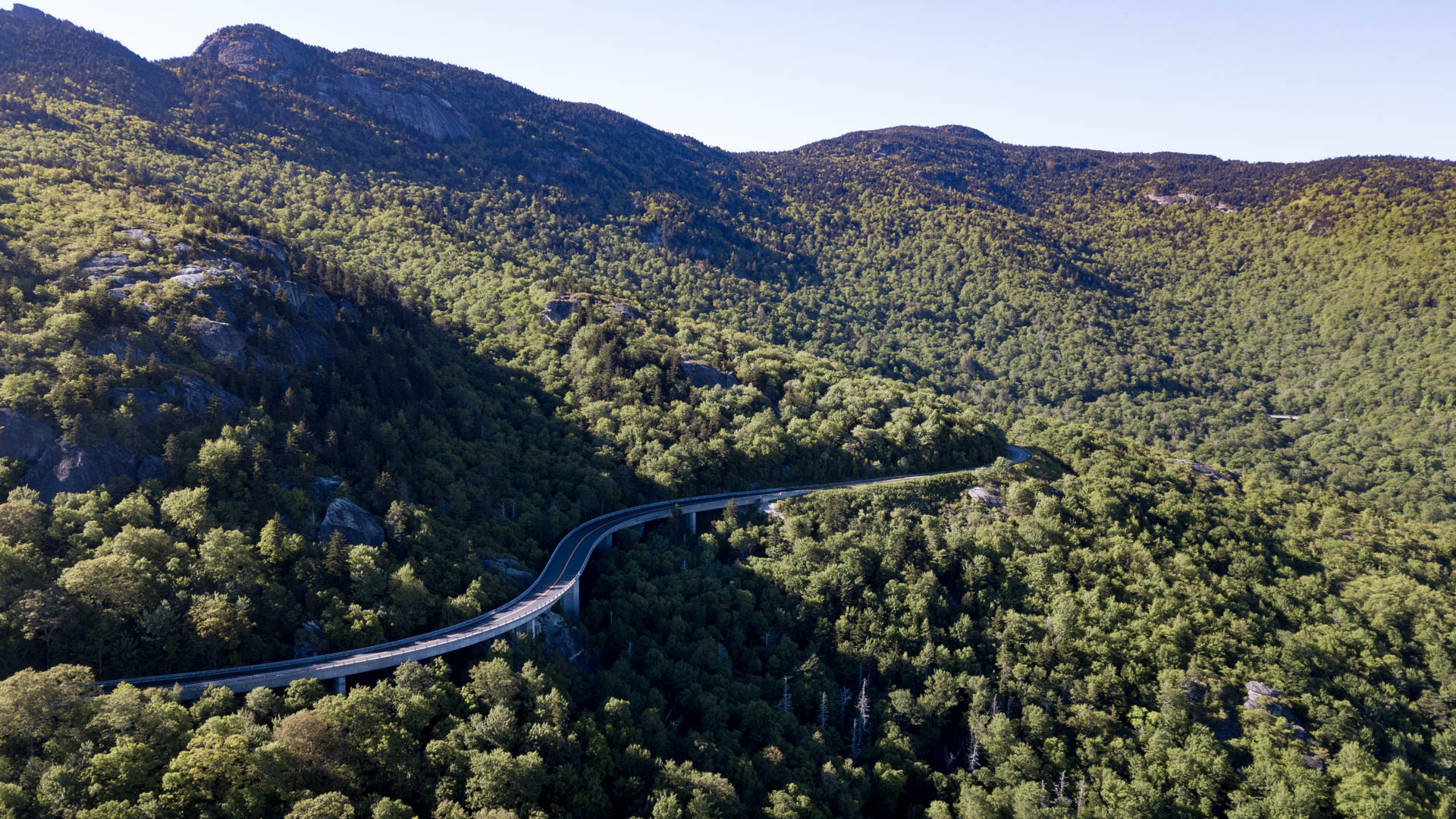 I really wanted to see some rail feight traffic tackling the infamous 'Clinchfield Loops' section of track which runs under the parkway near Altapass. No luck but we did manage to locate the track after a short walk off the parkway and I grabbed this image through one of the tunnels (this one is the head of the pass). I highly recommend reading the history of the loops with the link mentioned previously - very interesting if you're a train nerd!! 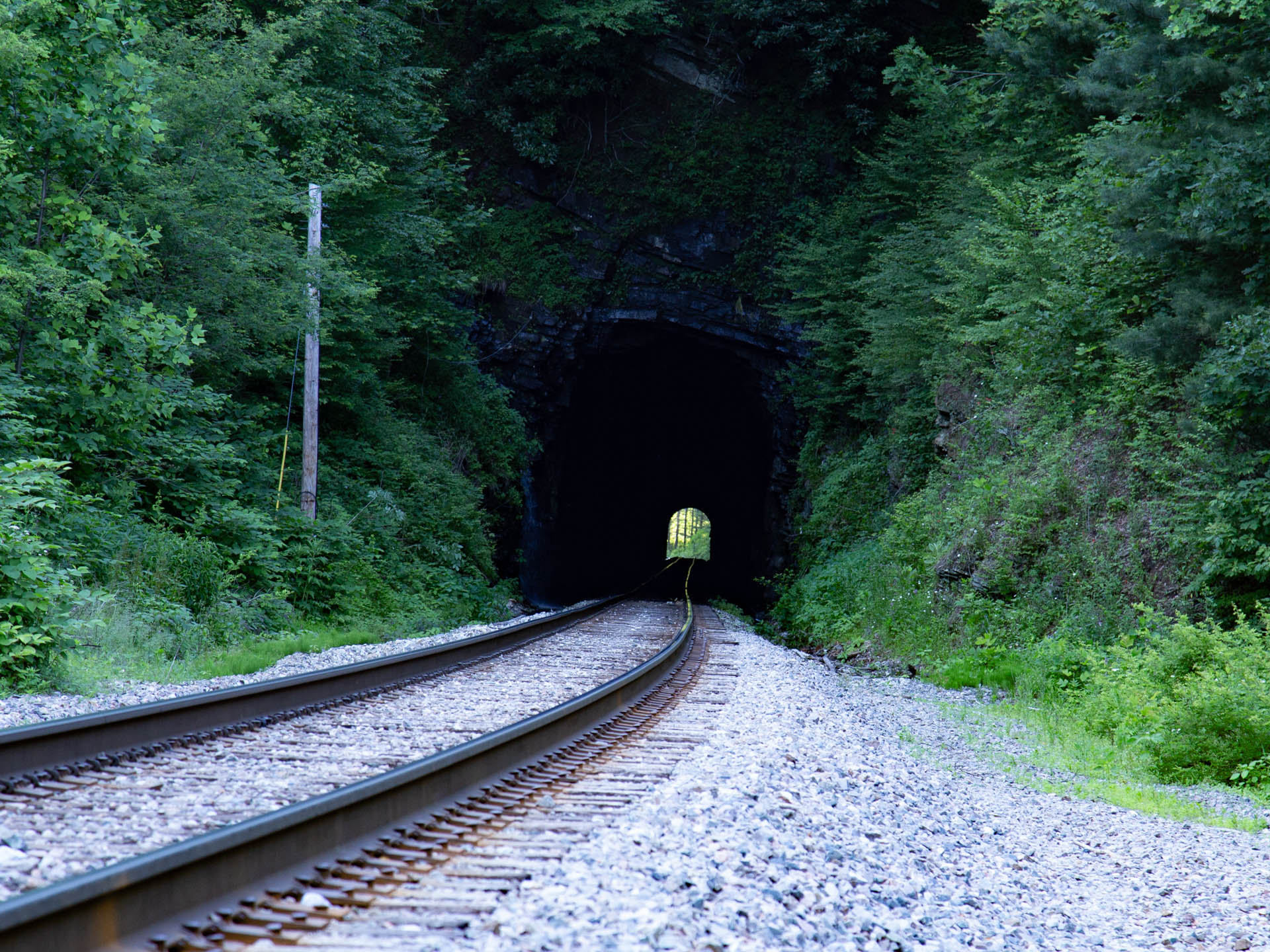 This is the "classic" blue ridges image at sunset. I was hoping that the sky would fill with a little more colour than we ultimately got but it's still a pleasing image nonetheless. 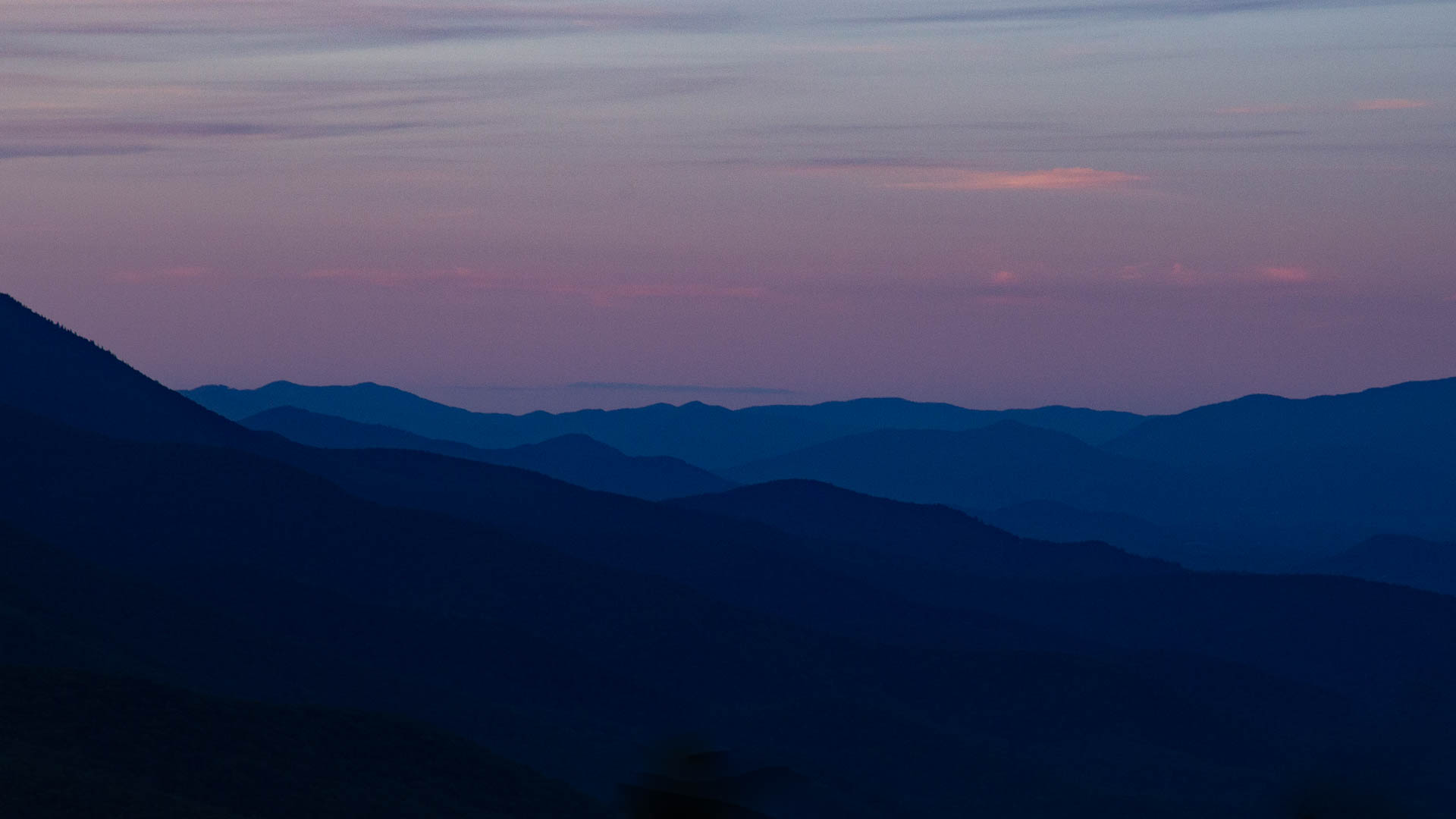 After 350+ miles of beautiful parkway we were only 40 miles from our stop for the next few days, Asheville. Our luck ran out and due to flooding, the final most dramatic section was closed. We turned around found an exit 11 miles back headed towards I-40 but that was closed too! We ended up having to take a nearly 90 minute detour in the end which put our arrival into Asheville at 10.30pm after a 10am start. Phew!

Turns out, we were actually pretty lucky as just today (Tuesday 5th) they have closed another section of the parkway due to suspected subsidence at around mile 270. 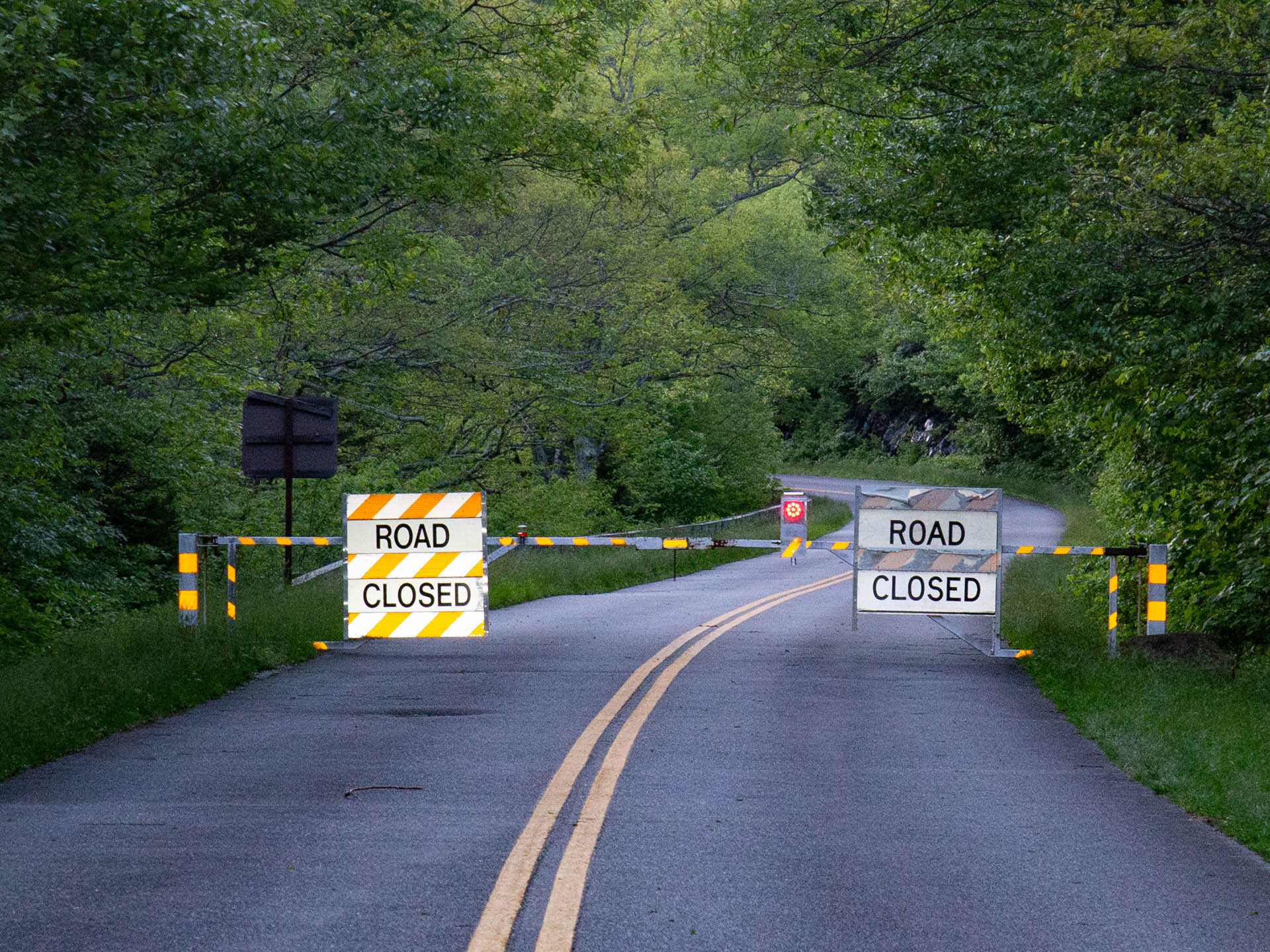 A "rest day" in Asheville today before we head West to Memphis and Austin by Thursday. This will give us time to look around as Asheville is a potential relocation destination. 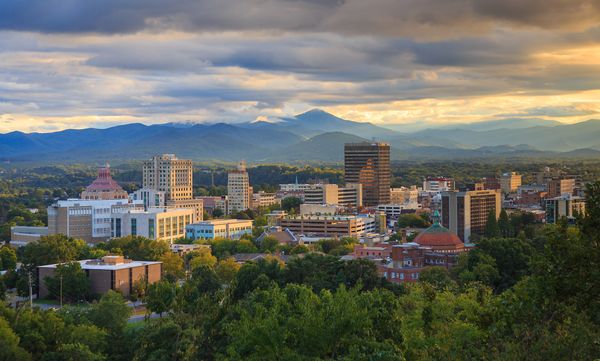 Nestled in amongst the Blue Ridge Mountains in the West of North Carolina is Asheville. This is a vibrant mountain town with a huge array of breweries, restaurants and a 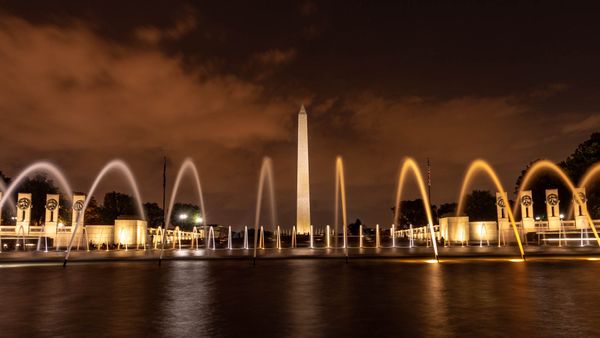 The home of freedom, Washington DC feels like a real city. Not just that but a capital city. The drivers here are just as impatient as you'd imagine, the road