Pinedale, WY - The last of the big driving days began with a pretty terrible hotel breakfast. Limp, vaguely yellow coloured omelettes stewing in their own juices served out of one of those stainless steel trays and a sausage patty not even McDonald's would likely serve formed the majority of the offering. No fruit was available and even the Orange Juice was about 75% water. The hotel in question was Baymont by Wyndham. Never mind, it was only an overnight bolt hole anyway.

We sat and watched them for a while before rolling into Jackson, WY around lunchtime. Jackson is not to be confused with the ski resort Jackson Hole a few miles away - the airport is named after the ski resort too. In what must be one of the coolest approaches in the USA the Grand Tetons run parallel with the right hand side of the plane as they come into land. Mental note, if ever flying into Jackson Hole - sit on the right.

They aren't the tallest around but boy, are they pretty darned photogenic mountains. On sheer grandeur I still think Switzerland has the Rockies beat but as we sat and ate a self-made salami and cheese sandwich (a roadtrip staple lunch, btw!) and watched the tour buses come and go from the famous Mormon row barn I couldn't help but just drink in the moment. These views have been on my bucket list for many years.

This barn is a super famous, cliché shot but it's famous for a reason. It looks great! We had such a wonderful hour or two in this valley.

Scurrying around us in the foreground of the shot above were these cute little critters. They are called Pika's. I wonder if that's how Pikachu was inspired? Catherine played stealthy and snapped this from her phone.

A theme that is beginning to emerge, and make a slight mockery of travelling are the drive-by tourists. I'm sure it's something I've been guilty of in the past. Pull over, snap a picture on my phone and without even looking at it shove the phone back into my pocket and zoom off again. We sat in this overlook (Tetons to the right here) for maybe 30 minutes whilst I fired off a timelapse and watched dozens of cars and buses pull in and all spend less than 15 seconds actually facing the view they were presumably there to see.

Look, I'm not saying there's a right or a wrong way to 'tourist'. But I reckon there's a fascinating PhD in it for someone to study the psychology of the average phone touting tourist.

When taking a photograph I generally try to tell a story. What was it that attracted me to this place? What was it within that view that made me think "yes, I want to capture this". Yes, a huge range of mountains. But what about those mountains? The textures of the snow intertwining with the rock and clouds? The peace and tranquility? An animal? Or maybe just proof I was there for the gram. And this is just it. Who are all these snapshots for? Instagram? Facebook? Snapchat? Speaking as a photographer I just don't get this incessant selfie / drive-by snapshot culture that appears to be emerging.

Creating a unique landscape shot in a place like Yellowstone or the Grand Tetons in a layby by the side of the road is not going to happen. So why bother? Being creative is a huge challenge in places like this. Quite by accident we all end up with pretty much identakit photos that pale into insignificance compared to the professional grade ones you can buy in the gift shop of the place you're visiting. It is for this reason that on this trip I've decided to attempt to creating a time-lapse video which I will share once we're back home and I can edit it properly. But for now, here's a glimpse of what I'm cooking up.

It's my first real attempts at time-lapsing so we'll see how the film turns out at the end of the week. I've planned a much slower pace than usual for this week as I think Yellowstone deserves that kind of respect. If the taste of the slower pace we could afford today was anything to go by then maybe this will become the new norm. Less, is more? That's the phrase isn't it?

We hadn't even entered Yellowstone yet before seeing our first Bison. Or is it Buffalo? Bison is the correct scientific name but Europeans are more likely to call them Buffalo. They are the same, so take your pick!

Our hotel for the evening is the Lake Yellowstone Hotel. There is no wi-fi or cellular service there so I don't expect this blog post to be published for several days!

A lifelong bucket list item for both of us ticked off today. I hope Yellowstone is as memorable as we have built it up to be!

After entering the park with our "America the Beautiful" all you can eat National Park pass ($80 annual fee) it was about an hour before we reached our Hotel and checked in. I'll save a review of the 'luxury cabins' for another post perhaps but suffice to say, they leave rather a lot to be desired!

I had itchy feet and it was still light. So we headed to 'fishing bridge' a couple of miles down the road from the Lake and after a few minutes only, we saw a Beaver!!

Wow, we'd been in the park only an hour or two and already seen a Beaver right out in the open! Fantastic!!

My big 150-600mm sports lens is really going to come in handy this week I suspect!

Look carefully and you'll see the Beaver swimming off downstream. He'd been more than co-operative with me though so I think he'd earned his bed.

A short way further up the road is 'mud-volcano', our first proper encounter with the thermal features of the park. Another insanely cool thing to witness, especially on our first night!

Carefully laid boardwalks wind their way through the myriad of geological features in the park and they mean that you can walk right up to them. The light was beginning to fade but we had the place to ourselves. Catherine got a hint of service at the top of the hill near one of the geysers so we were able to send Dad a happy father's day message too. 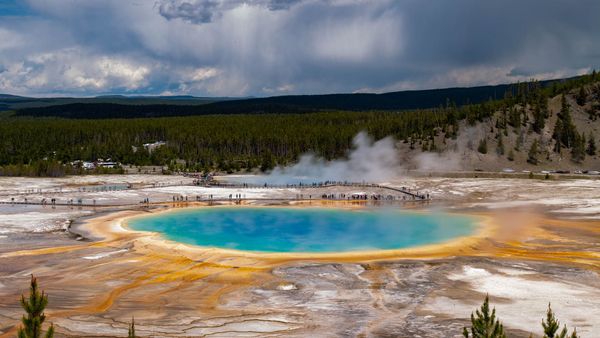 We're thinking that treating the park like it's on Spanish time might be the best approach. Rise early and tourist until lunch, then eat. Sleep off your lunch until around 3 or 4pm at which point you might consider heading out again. 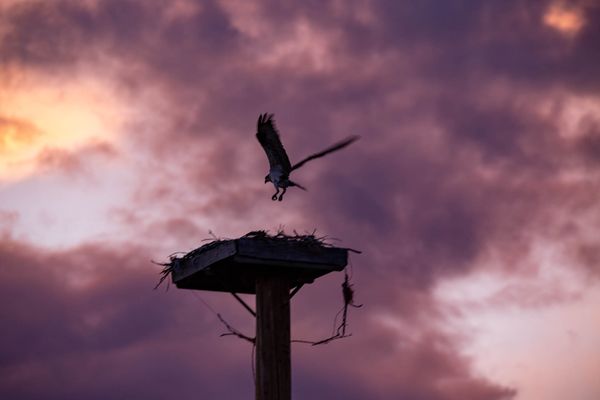 The architecture had a certain 'western' feel to it without being obviously a pastiche. A tumultuous thunderstorm (pictured above) made its way across the back of the scene as we hopped out the car for a short walk across a bridge spanning the 12 tracks here at Laramie.