I recall reading a stat somewhere once that something like 85% of visitors to an American National Park stray less than 400ft from their vehicles during an average visit. Having noted yesterday the drive-by tourist behaviour I can certainly see that stat having some basis in truth.

We set out to not become a statistic today with a walk around the Grand Prismatic spring and a 5 mile round trip hike to Fairy Falls.

Grand Prismatic Spring is the first thing that comes to mind when I think of Yellowstone. I've seen many pictures of this incredible place but the old cliche of you have to see it believe it is really true here. The colours are just so vibrant! There's so much detail in the orange-y run off areas that is lost by looking at the whole thing. Every inch is a micro marvel all of it's own.

There is a large boardwalk from the car park to the spring operating in a one way system. It was busy, but not too crowded. We had to wait for about 15 minutes in a queue to get into the parking area but an orderly wait by the entrance, one in, one out sort of system had established itself informally. No fuss and as I said before, we have a whole week here, our pace is set to chill.

After we'd done the boardwalk we noticed there was an overlook high above the spring. The path there was fed from another car park a mile or so down the road. After negotiating the queue for the toilets (yes, it's high season so there's a queue for most things between 10am - 4pm in the main areas) we began the short 10 minute walk to the overlook. On the way there we were treated to this amazing spectacle. The steam coming off the spring seemingly glowed, mirroring the colours of the water beneath. Now this was just a happy tricky of the sun illuminating only the pool and not the foreground but the effect is stunning none the less.

The overlook is absolutely worth the 10 minute walk and was massively quieter than the main boardwalk. The 400ft rule, perhaps? After perhaps an hour or so where I again experimenting with the art of timelapse we noticed that the trail didn't end at the overlook.

One of Catherine's planned hikes this week was to Fairy Falls. We were correctly shod and watered so after asking a stranger how far (1 mile they said) we thought, "we're already halfway down the trail so why not!?". 2.5 heavily mosquito laden miles later we arrived at the foot of a 200ft high waterfall named Fairy Falls. Unfortunately the mosquitos were so bad we didn't really stay for more than a couple of minutes to enjoy our view.

By the time we made it back to the car we were both a bit tired having frog marched our way through the mosquitos. We had a dinner reservations at the Old Faithful Inn though to recuperate. The Inn is a marvellous building made of rustic looking logs and beams. The meal in the restaurant was so, so and rather expensive considering. I'd probably avoid actually dining there if visiting in future.

After dinner we waited about 30 mins for Old Faithful to erupt underneath a stormy looking sky. Indeed there was lightning all around us making for a cool experience.

The whole Old Faithful area of the park is probably the most commercial part we've found so far. Huge car parks, multiple visitor buildings and places to eat and meet the calls of nature. It's a reminder of just how busy this place can get. But, because it was about 8pm by this point the crowds had long since dissipated and we were left to watch Old Faithful with about 100 other people.

We're thinking that treating the park like it's on Spanish time might be the best approach. Rise early and tourist until lunch, then eat. Sleep off your lunch until around 3 or 4pm at which point you might consider heading out again. This has a couple of benefits. Firstly, who doesn't enjoy a nice post lunch nap? Second, afternoon thunderstorms are common here - similar in nature to Florida. Third, the wildlife seem much more active outside of the 10am - 4pm window. Maybe they don't like the crowds? Who can blame them? I'm not so keen either! 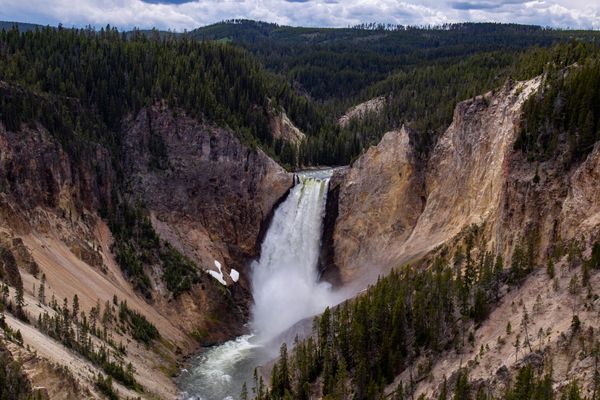 The colourful yellow rocks lining the canyon mark a change in the geology of the area and create the best waterfall I think I've ever seen. 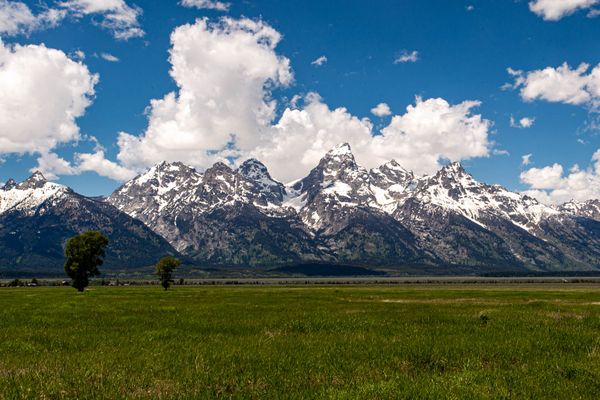