Alarms at 4.30am are never really that pleasant but today I was out of bed after only one snooze. Catherine and I's excitement was palpable as we showered and wrestled the final few devices from their chargers and into our bags. We left the house at 5.15am catching the first train we could to London Bridge at 5.3-something before changing to the Jubilee and onto the Pic bound for T5.

Our flight departed London Heathrow at 9.50am. When we moved to London, I had expected getting to the airports to be significantly easier. Maybe it is, but one train and two tubes later it certainly didn't feel it! Maybe my pre-breakfast zombie-esque brain had something to do with my perception! Crossrail when it opens next year stands to make a huge difference to the accessibility of Heathrow from the rest of London. At the moment, there is Heathrow connect but at £25.80 each plus tube fares to get to Paddington (and only a total saving of 10 mins) versus our Picadilly Line based approach at £5.80 each, it was not really the economically sound choice.

Airport security was painless said no-one ever! We were through in under 5 minutes and found a Wetherspoons for breakfast. I recall T5 being built to much fanfare when I was younger and whilst it definitely isn't new anymore it's one of the better airport terminals in the UK. Clean, spacious and it even has a little DLR style underground shuttle train for the furthest away gates saving us a 15 minute or so walk. The weather in Blighty was... to put it bluntly, miserable. Cold, around 15c, and wet drizzle. A far cry from the forecast in LA of 30c wall to wall sunshine for the next several days. Bring it on! 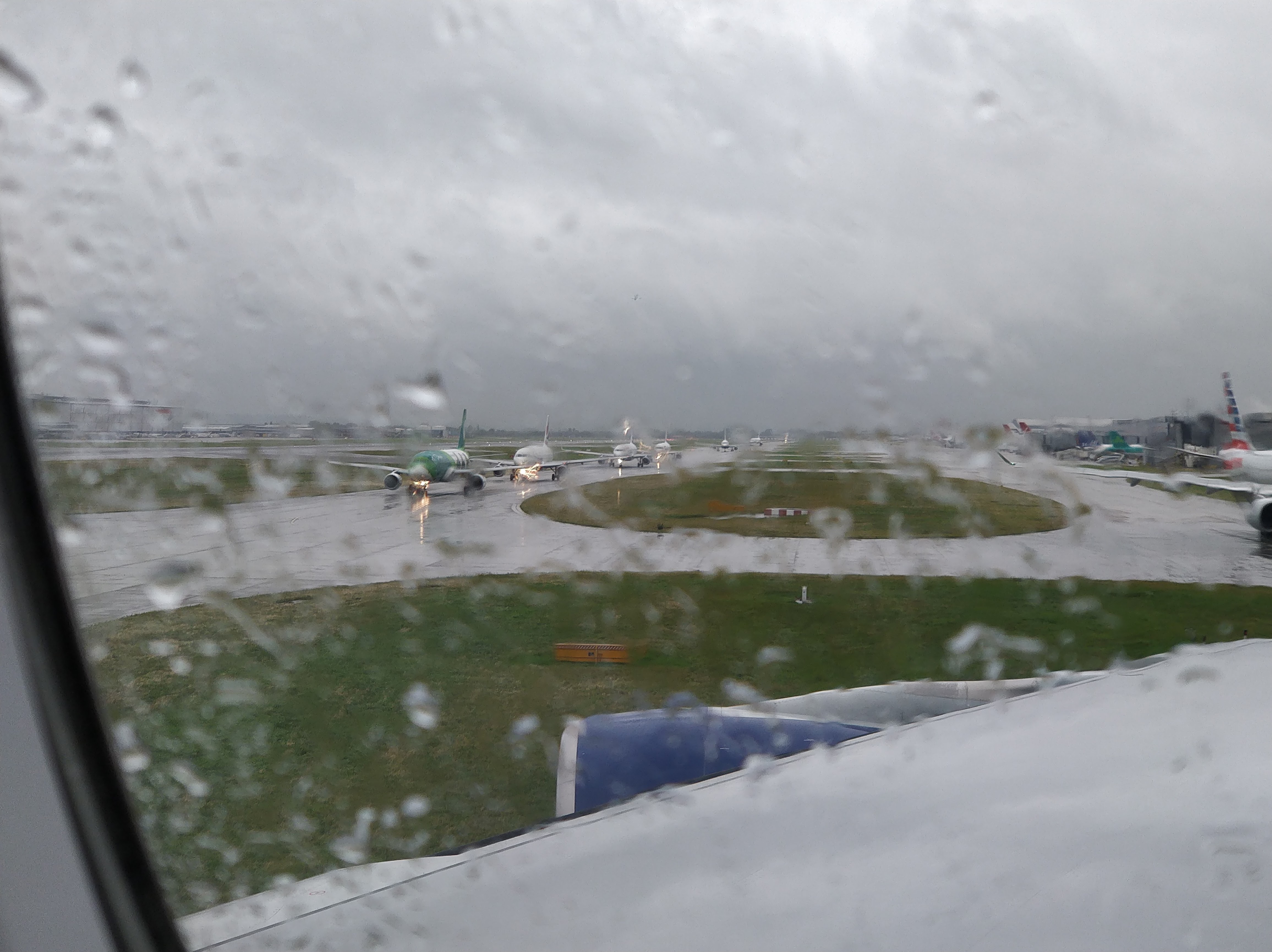 Just ask Catherine, I've been possibly a bit over-excited about our vehicle of transit with British Airways - an A380. Our flat is just about under the beacon where planes turn to line up for landing on approach to Heathrow so we see several of these monsters fly over daily. Hanging in the sky like lethargic juggernauts I find them awe inspiring from the ground. Just how on earth do they stay in the air? There are something like 300 !miles! of cables in this plane, it burns less fuel than a Prius and it has 40% more floor space than a 747. I know it's 10 years old but it is an engineering masterpeice.

As we taxied to the runway something about the momentum of the plane felt different, like a large boat versus a little one and that translated into the air too. I suppose it's obvious but such a heavy plane doesn't skip over turbulent air pockets like the little planes I'm used to on European hops it simply goes through them! This results in a really smooth flight akin to riding in a big, cushioned vehicle over a bumpy road - very nice. 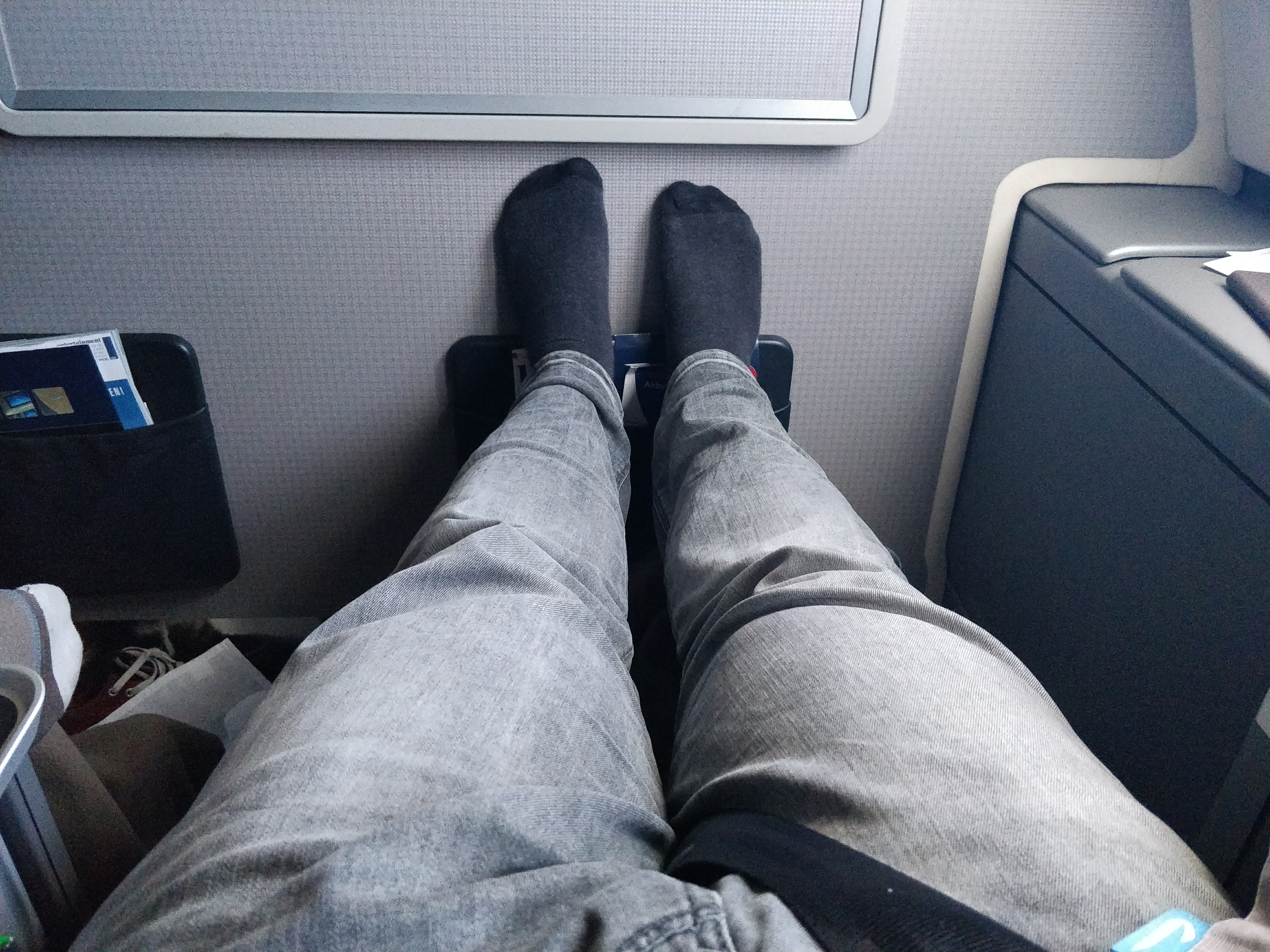 We decided to treat ourselves and for the first time not fly economy. World traveller plus is the one between business class with the swanky fold flat beds, which I'm sure I will envy considerably more on the return leg, and economy. The seating arrangement is 2 - 3 - 2 (vs. economy with 2 - 4 - 2 upstairs and 3 - 4 - 3 downstairs, they have significantly less leg room) with extra wide seats and so much legroom that I could fully extend my legs in front of me horizontally. Somehow, we got the front row which is a bit more generous than even the other seats and for the legroom alone I feel like the upgrade has been worth it. Besides how comfy I am right now and how delicious the food was there is one thing I'm really enjoying and that is a real-time map in the (frankly outdated) infotainment system. It's not much but I like knowing I'm going over the Lake District (we got a great view of Morecambe Bay and the fells) and then out over Ireland onto Greenland and right now, I'm above Hudson Bay. Lastly, we're sat upstairs on a plane as I write this (how cool is that?). This really is the way to travel, the only thing that would beat it is a fold flat bed but unfortunately I have a mortgage to pay. 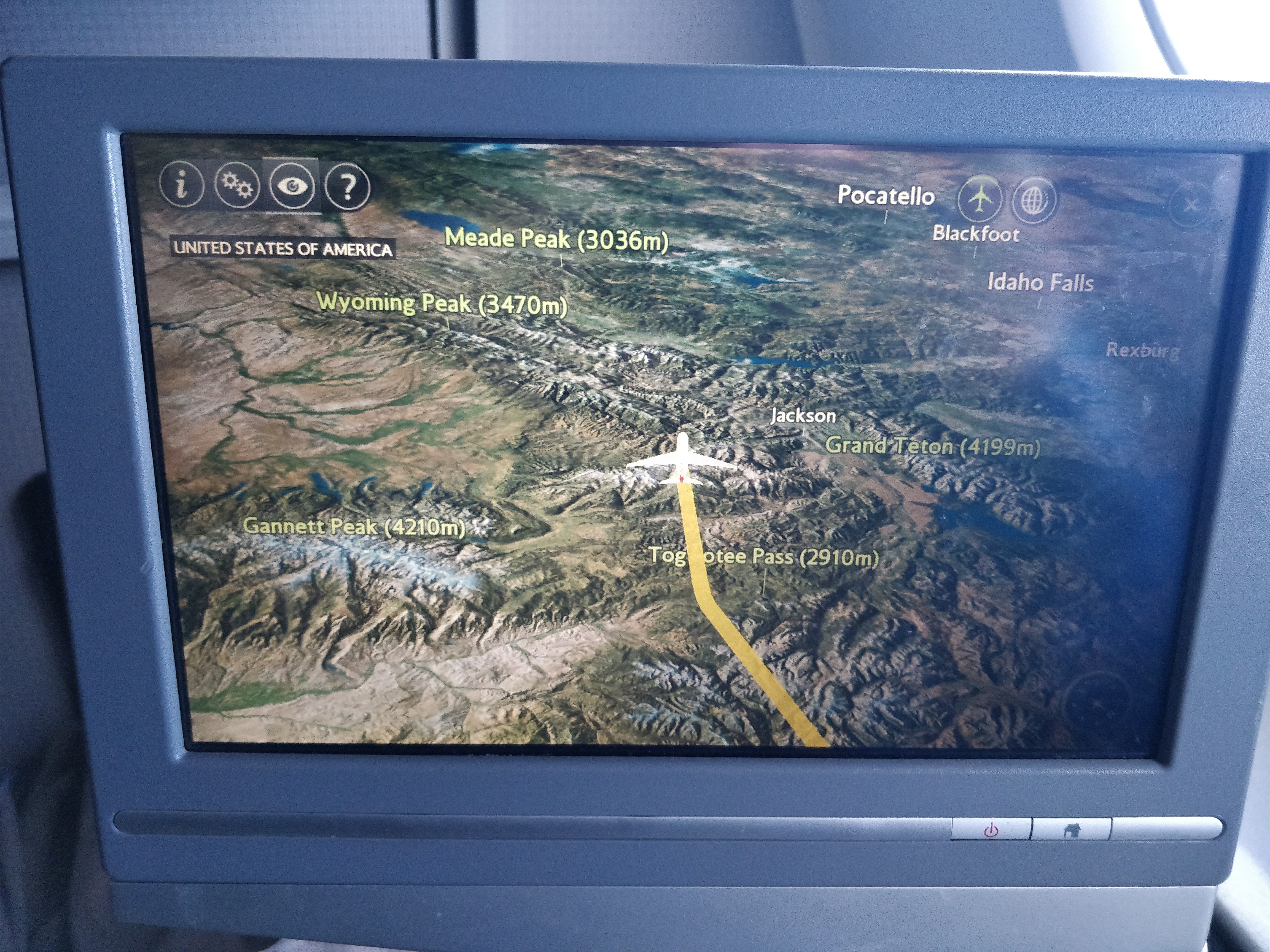 We landed, as our Captain informed us over the tannoy, at "A380 rush hour" with three of them landing at once. This meant the airport was... busy. Very, very busy. As a US national I got practically waved through but Catherine queued for nearly forty minutes at passport control. A nice passport guard called Austin got out from behind his desk and called for "all Americans this way! No, American only ma'am! You're not an American!!!". He welcomed me home to which I just smiled and went on my way!

Baggage claim was just as chaotic. For some reason they decided to put four flights worth of luggage on the same carousel at the same time which meant it jammed because all the passengers were still in passport control! Oh well, I was waiting for Cat anyway and watching others get stressed by things beyond their control which when you have all the time in world is quite relaxing! Our bags turned up and a few minutes later, so did Cat. She'd found some sneaky free wifi in the passport queue to let me know of her delay. 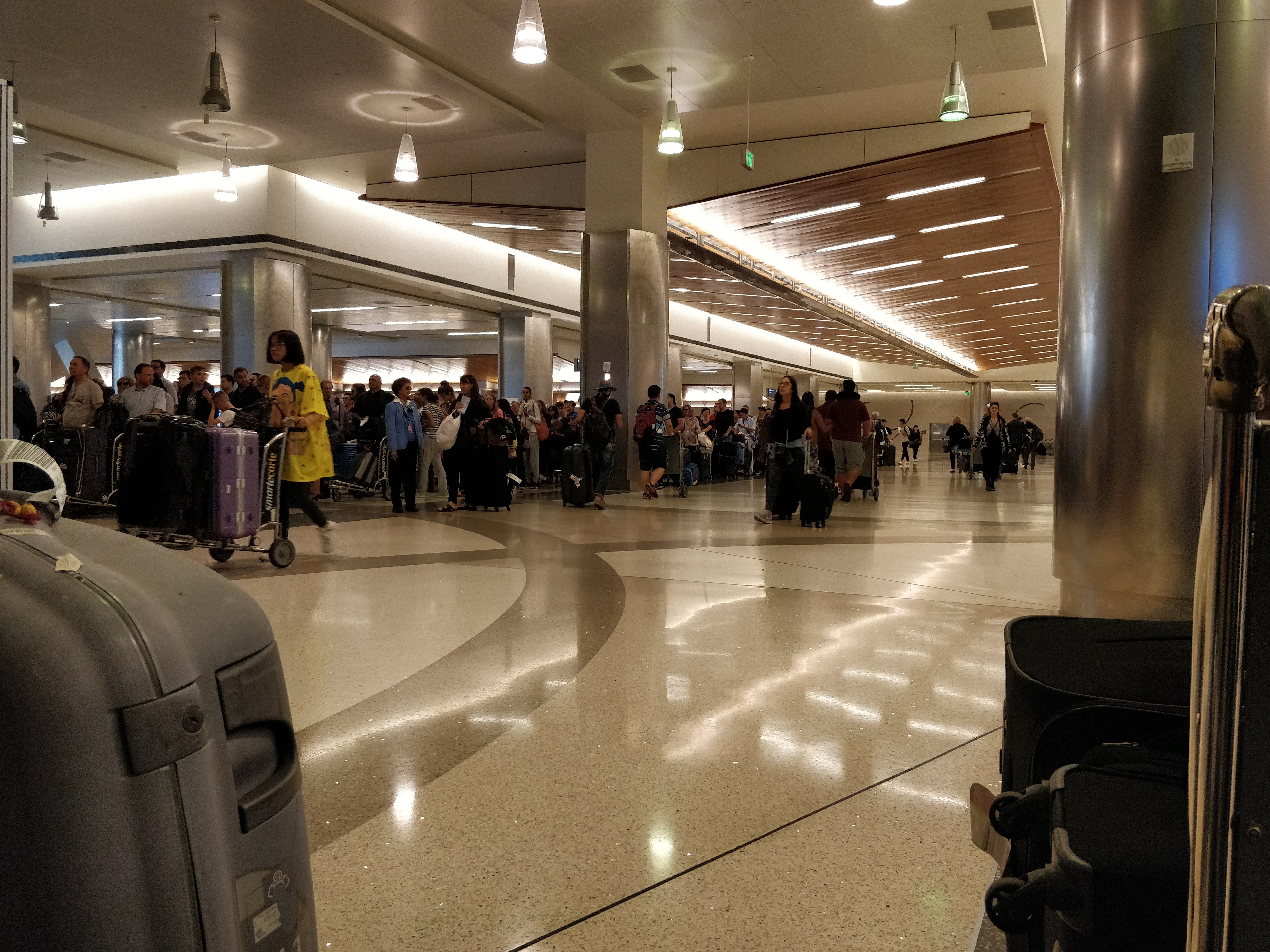 We stepped out of the airport after queueing (again) for customs above into a cacophony of noise, horns and lots of busses. We found our hire car company's bus and hopped on. Twenty mins later we'd been dealt with at the desk and were choosing from an array of SUVs. We ended up with the 'or similar' option, not the Rav 4 I'd booked - oh well. We have a Nissan Rogue, a big beast of an underpowered SUV that it has plenty of room for us to kip in the back should we decide to in the desert next week. 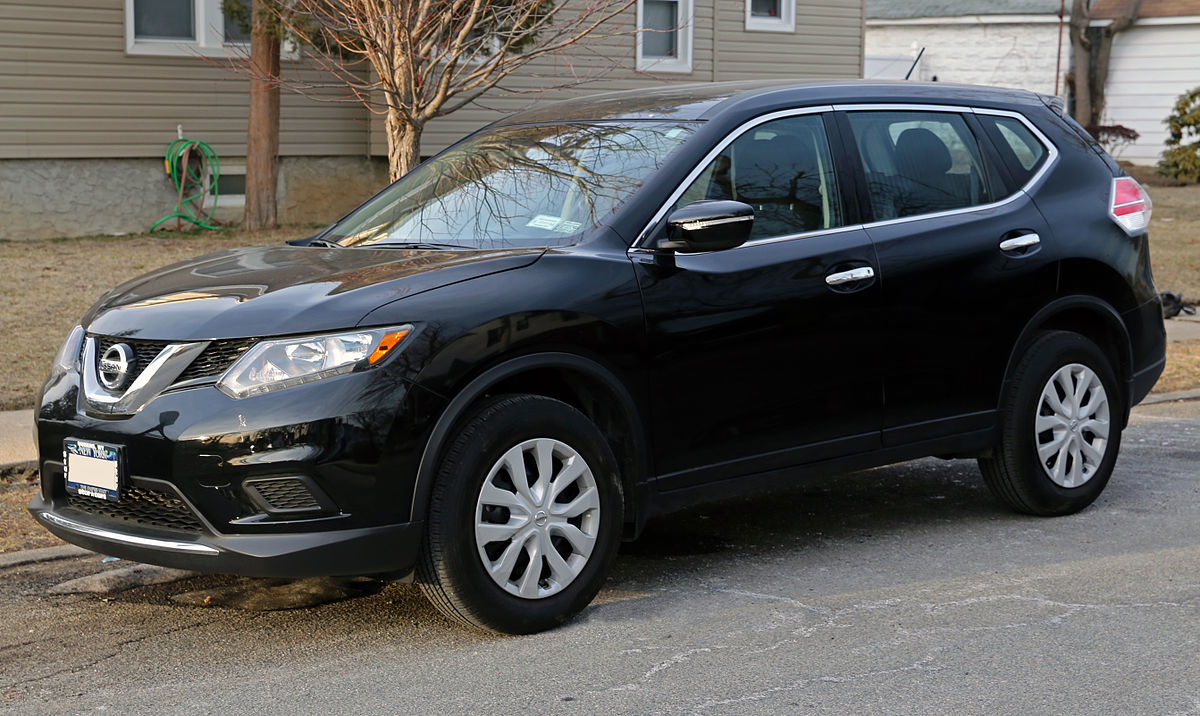 By this point it was 15:40 local time (we landed at 13:00). We fired up the Sat Nav and headed to our Airbnb near Venice beach, only 15 mins from the airport. It's a nice little studio, though a little warm without AC. Once we'd arrived we made the mistake of sitting down. We both knew we had to stay awake as long as we could to counter the jet lag but that 4:30am UK alarm was really catching up with us! So, we headed out.

I needed a power cord for my laptop and gadgets so we stopped at a hardware store, who didn't have one. Then, we carried on to Best Buy which is really just a Currys clone and picked up what we needed there. Over the otherside of the parking 'lot' (trying to use the lingo here) was a Panda Express. I listen to a lot of podcasts, maybe some 10-20 hours a week worth and the hosts slip in a lot of their daily lives over that kind of time frame. Thus, I'd heard of Panda Express and upon seeing one in the flesh had to try it. 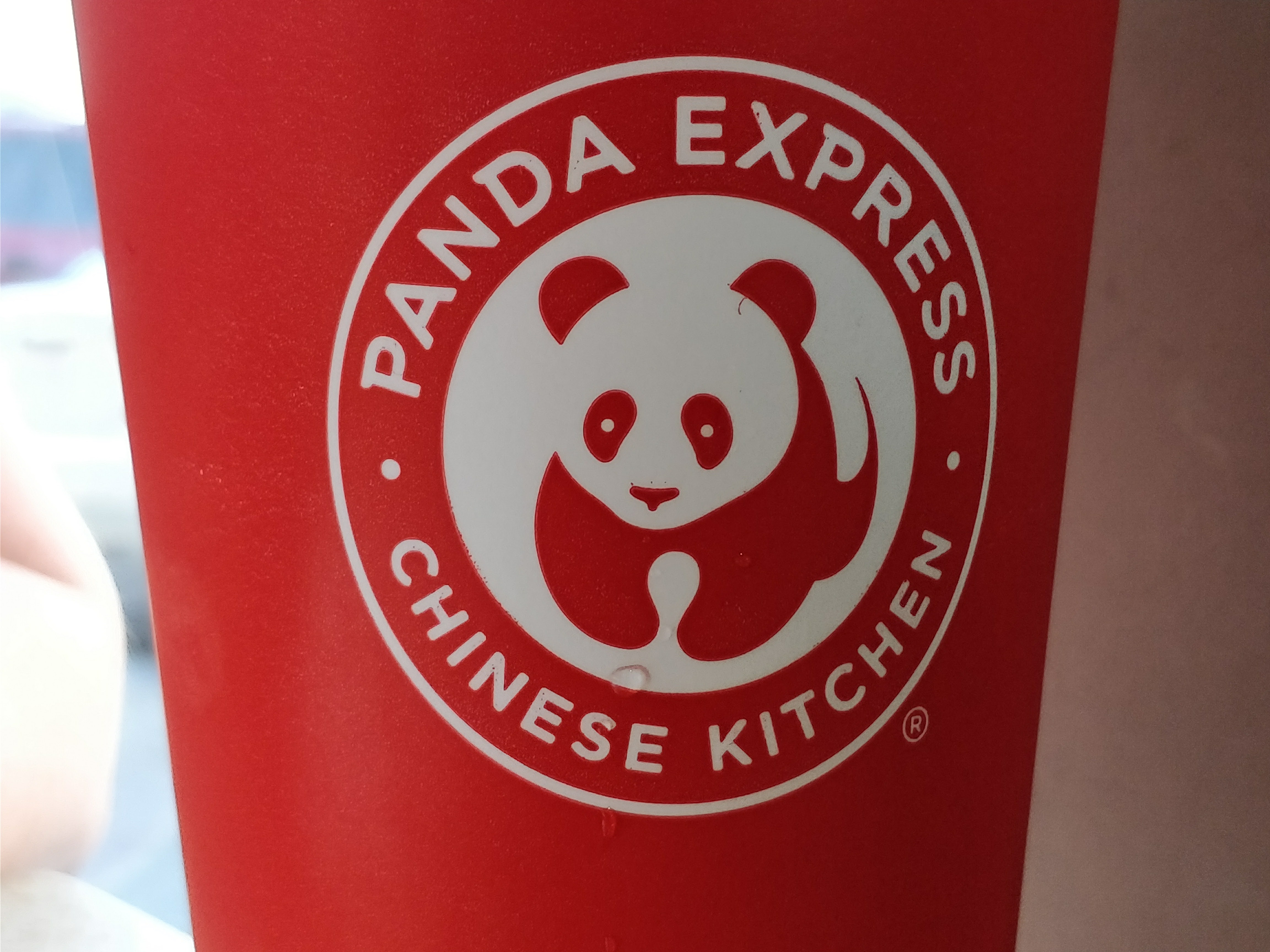 OH. MY. GOD. My new favourite noodle / chicken restauraunt. I love these sorts of places back home (Chopstix, Spoontree, etc) but this place... NOM! Delicious firey chicken later we headed over the other, other side of the lot to a local grocery store called Ralph's. It was absolutely piled high full of enormous sized packets of everything you could think of but it had a particularly large selection of pre-made cake mixtures and more apples than I've seen in one place in my life!

Anyway, this entry is quite long enough now. We had had enough of being awake so headed back to the flat and wound down for the evening. Eventually we gave up around 18:30 local time waking the next morning at 6am. Some low flying helicopters and police chases I think happened over night as I heard all sorts of commotion but I was absolutely dead to the world and didn't care!

Today, we're going to head out for Beverley Hills, Bel Air, the Hollywood sign and some downtown LA action. See you tonight! 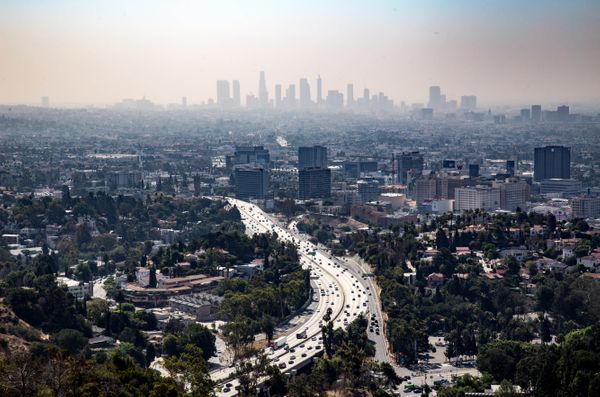 Entrance to the Space Shuttle Endeavour exhibition hall was $2 each, more than reasonable in my view. This was just the coolest thing. Who doesn't love the idea of a reusable spaceship!!!

And so begins a new adventure, this time a big one. The biggest of 'em all... The USA. Starting tomorrow, the next 3 weeks ought to be pretty special. We