"A pocket of liberalism in a sea of conservatism". This is how one Texan we met described Austin to us and he wasn't wrong. We found Austin a truly wonderful city with great people, incredible food, positive outlook on life and a relatively affordable cost of living.

Texas Linuxfest was the reason we were in town. I listen to a lot of podcasts and when Chris Fisher from Jupiter Broadcasting announced he was attending we were supposed to be flying home from Denver on the dates of the fest. I asked my boss if "you know that 2 week trip I've got, can I make it 3?". He said yes and thus a trip to Austin was born.

Thanks to Adam Balla (@chzbacon) from the JB crew for letting me use this really great picture below. For the uninitiated Chris Fisher is the guy enthralling both Cat and I with the beard on the right. 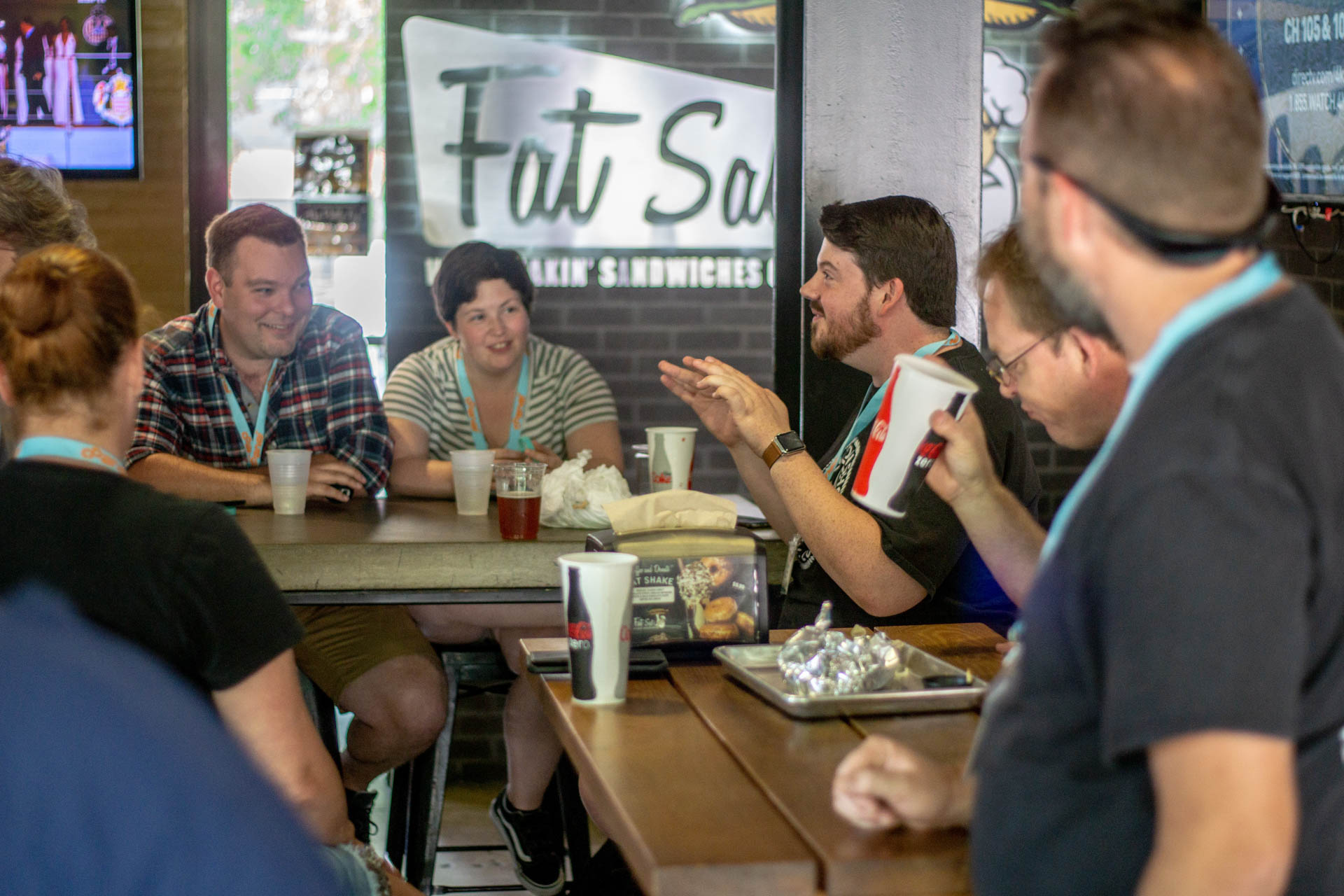 My journey with Linux properly started in 2012. I had a 1.5tb hard drive fail and I lost years worth of music, movies and media. I started dabbling in Linux via a Synology but quickly ran up against the limits of the potato CPU, low RAM and didn't know enough to know that it wasn't full Linux. I sold the Synology and built an unRAID box instead. Much more cost efficient and simple enough that I could get it going at the time with my limited skillset.

Then, whilst on holiday in Cornwall in July 2012 I read this post (you now have to click through to the 'new' version) about PCI passthrough using Xen. In short, this allows virtual machines direct access to hardware such as graphics cards and SAS controllers - something VMs can't normally do. Back then it was really cutting edge stuff and required learning a lot of stuff I had absolutely no idea how to do. Compile a Linux kernel? I had no idea. Thanks to the forum member ddeeds who sat on Skype for night after night with me getting things working I knew I had found my passion. When all said and done I had one computer acting as both a media server, XBMC frontend and a desktop system plus a bunch of other stuff. It was during this time I and some friends started Linuxserver.io which just passed the 500 million download threshold!

Getting the Perfect Media Server working was an all consuming project and one which led me to thinking about leaving Apple, doing an MSc in Computer Science and ultimately to working for Red Hat, the Linux company.

Whilst doing the MSc I discovered Jupiter Broadcasting. Originally it was an episode about pfsense (a firewall) which sucked me in and I found the long form content of the Linux Action Show a challenge at first. However, when I took that job in Cambridge with a 60+ minute commute in each direction every day I quickly became thankful for it and started to branch out to the other shows on the network.

All this to say, that I consider Chris a hugely influential part of my development. It was a real highlight of the trip for me to get to meet him and the rest of the JB community. We had several opportunities to chat throughout the weekend and he is a really great guy, it was nice to finally make the connection in person. 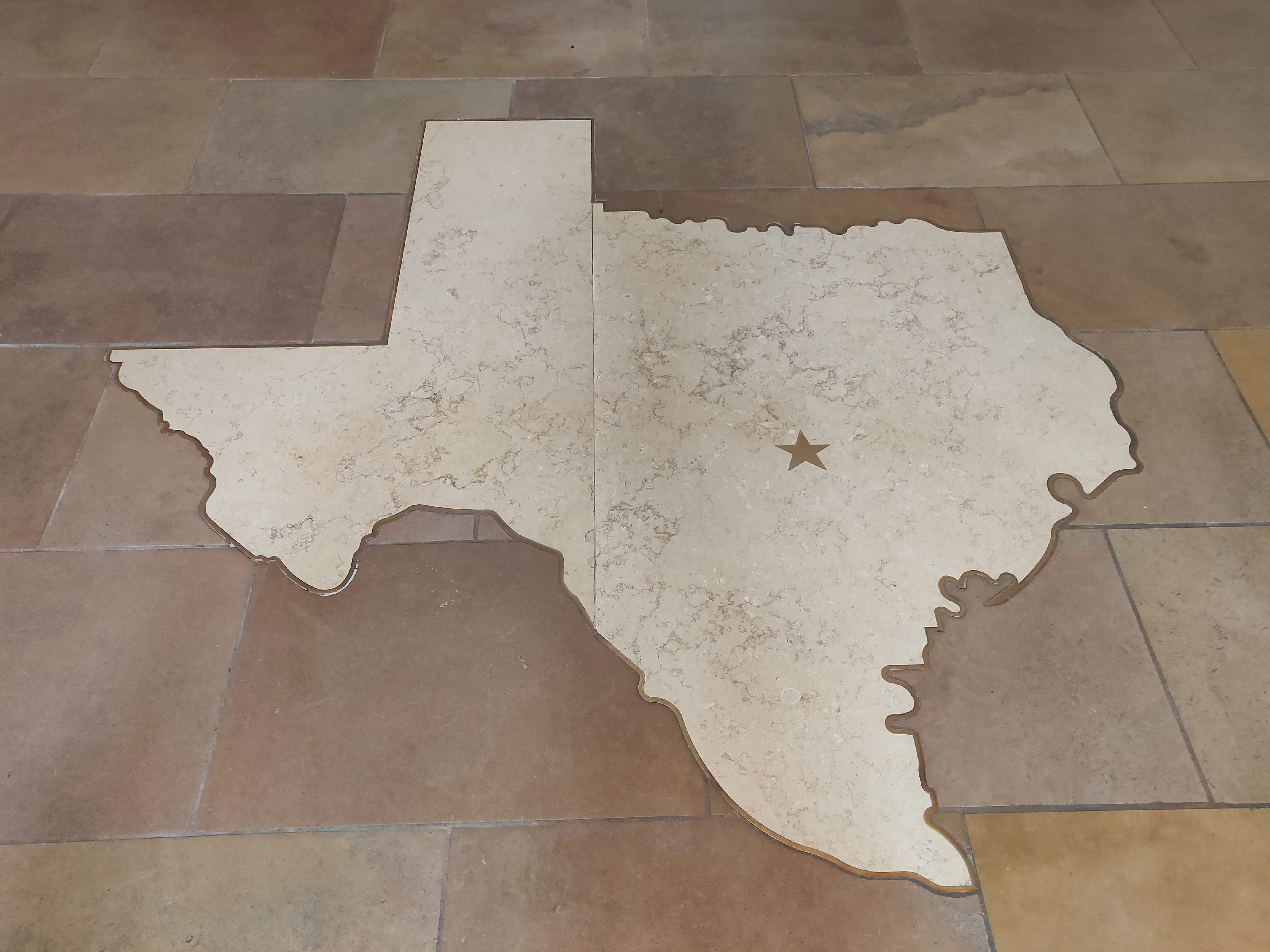 Across the road from the convention centre was the state history museum, Austin is the state capital after all. I was glad of this because it meant Cat could go round it at her own pace whilst I did my thing. She is ever ready to learn and I am always in admiration of her ability to soak up information and retain it! One such Texas factoid:

The lone star state gets the moniker from a 9 year period where it was an independent country before joining the United States union in 1845.

They say everything is bigger in Texas and they really do mean it. One of the meet-ups with the JB crew throughout the weekend took us to Terry Black's BBQ. 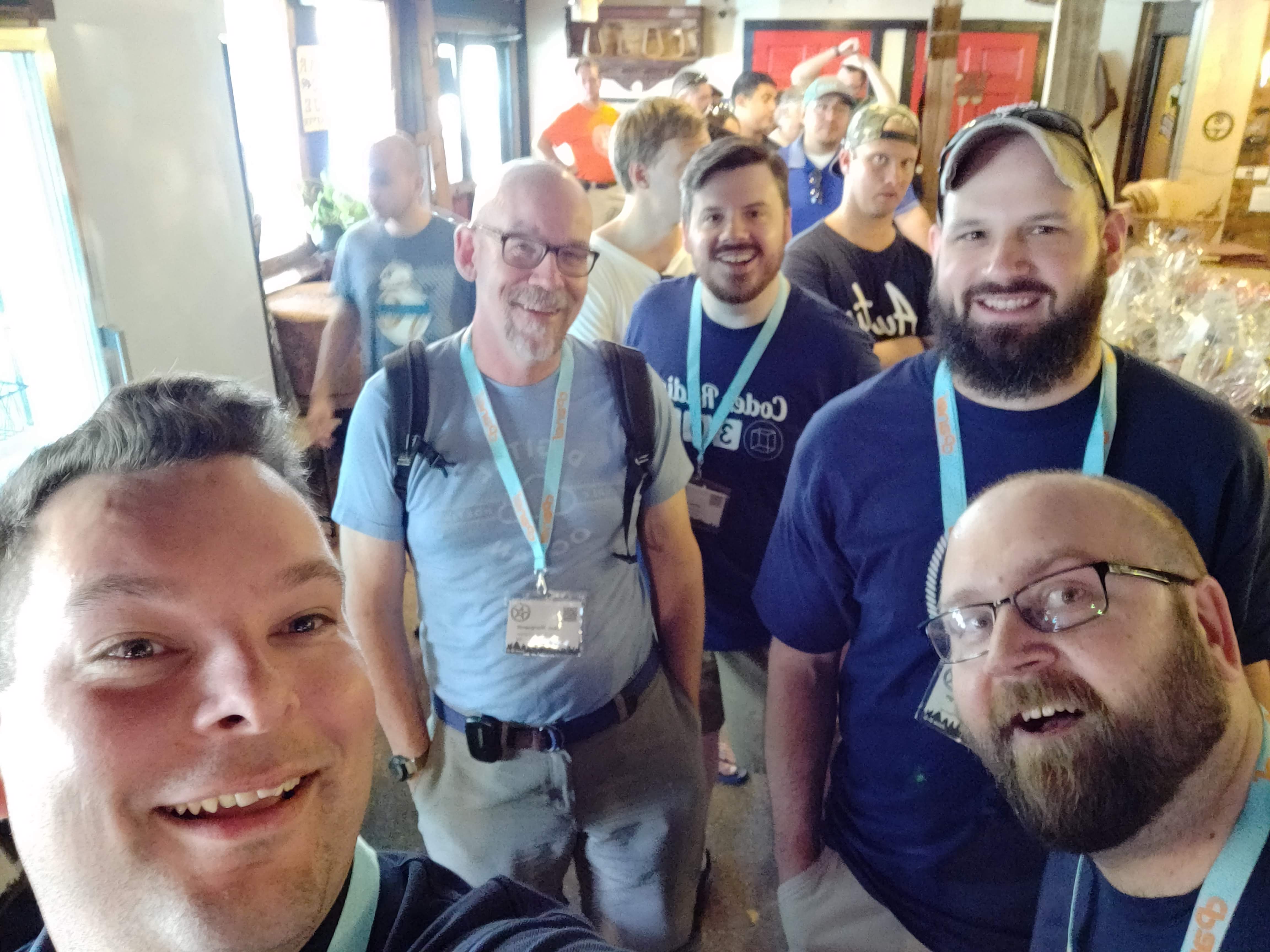 We've tried several different types of BBQ on this trip from Eastern North Carolinan vinegar based to West NC tomatoey based to Memphis Ribs to Arkansas Catfish to Texan BBQ.

The BBQ we had in Austin at Terry Black's was life changingly good.

If food is a factor in our decision for where to live, and why shouldn't it be?, Austin won a huge victory over anywhere else thus far on the trip. I know BBQ is not enough to sustain man alone (I wish it were!) but there was a hugely diverse range of other fare on offer from Sushi to incredible Tex-Mex. 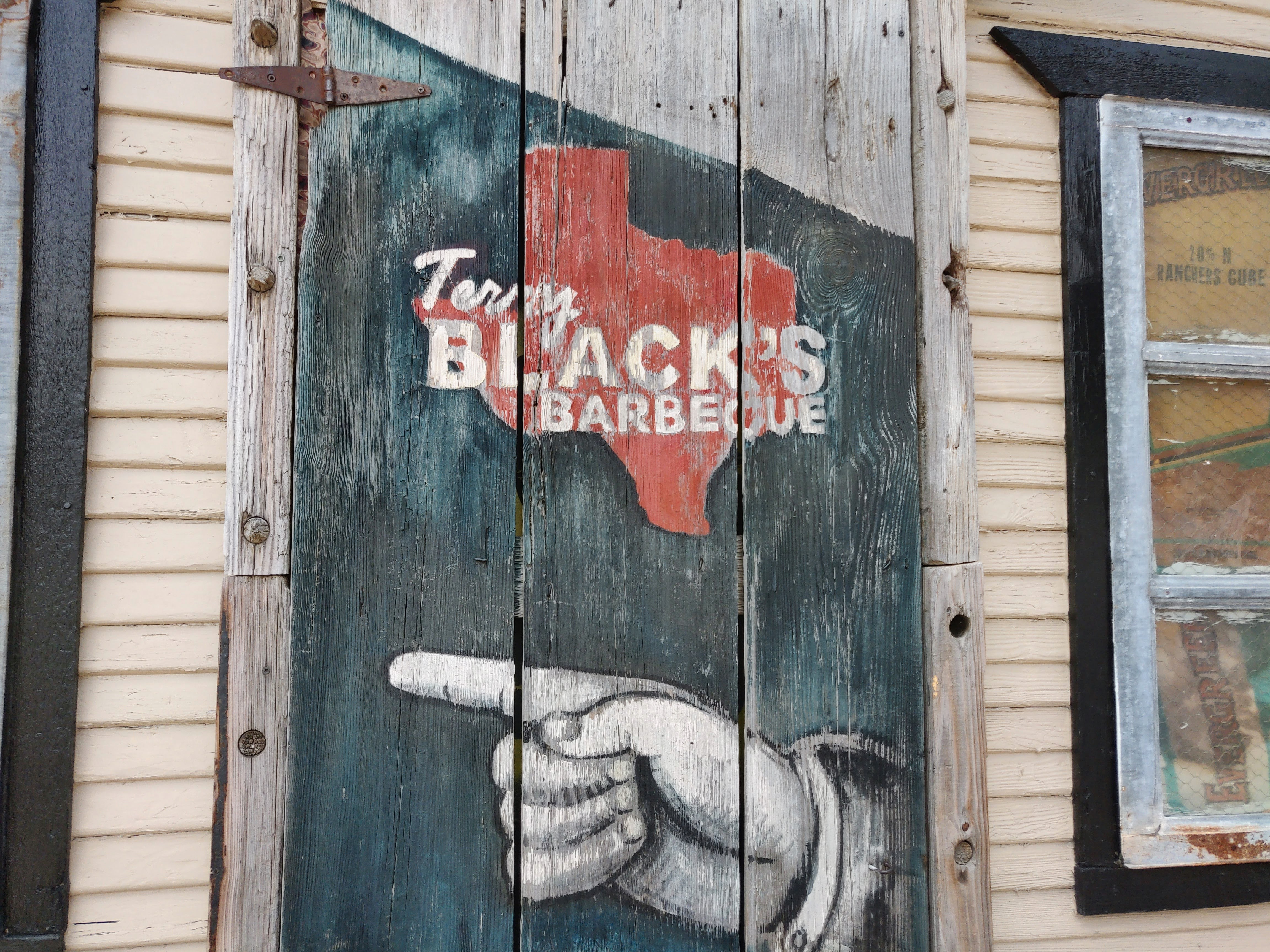 On the way out we toured the smokers lined up in the parking lot. This is BBQ on an industrial scale. The inside of Terry's was setup like a 'hot butchers' so instead of ordering a traditional plate you visit the counter and ask for the weight of the various bits of animal you'd like. Worked great and meant you got to try a little of everything without being completely over faced. 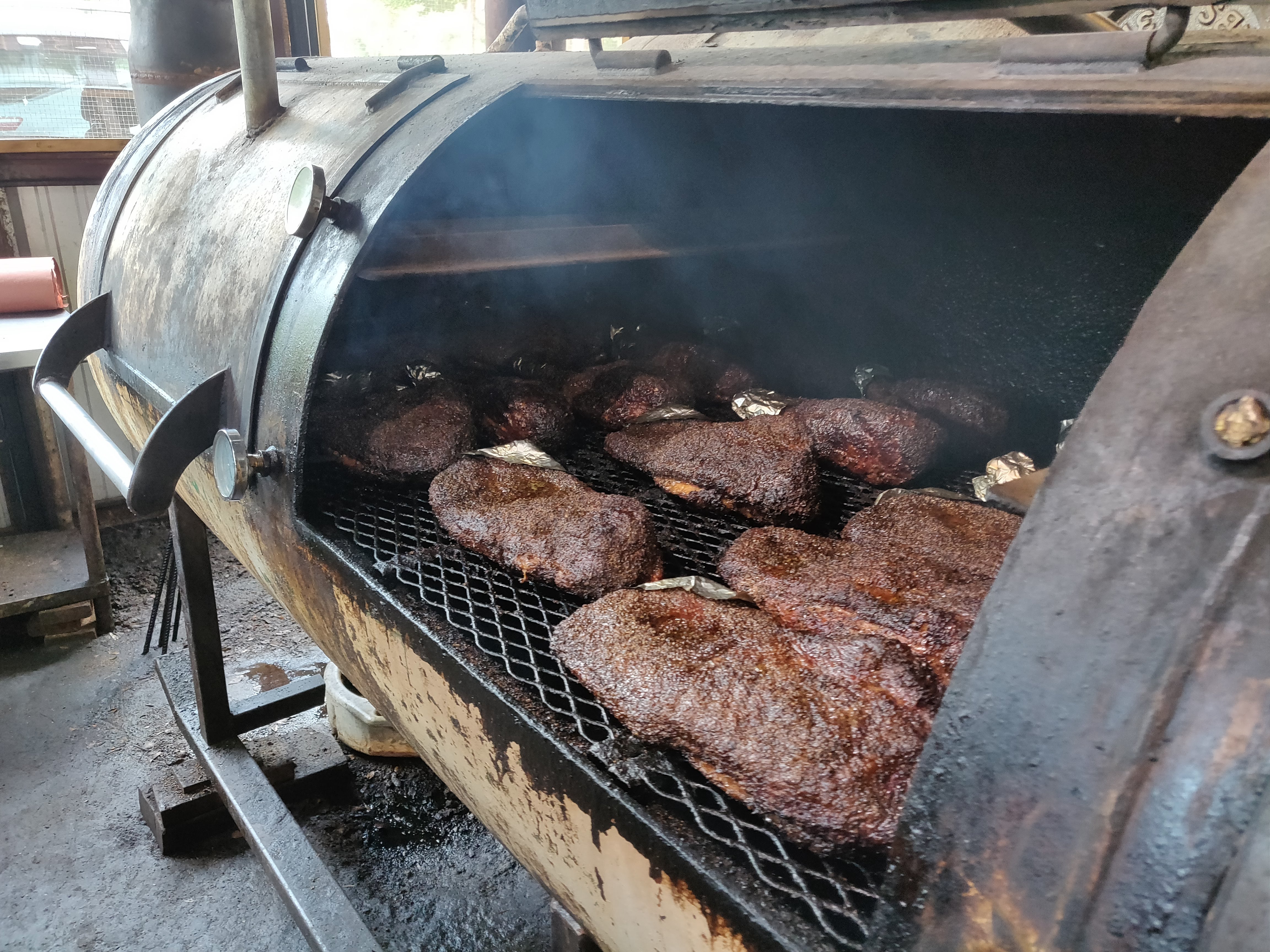 The fest continued and so did the meet-ups. We encountered a sign of just how liberal (or weird?) Austin is when as were supping on our evening drinks a naked bikeride stopped to show all! 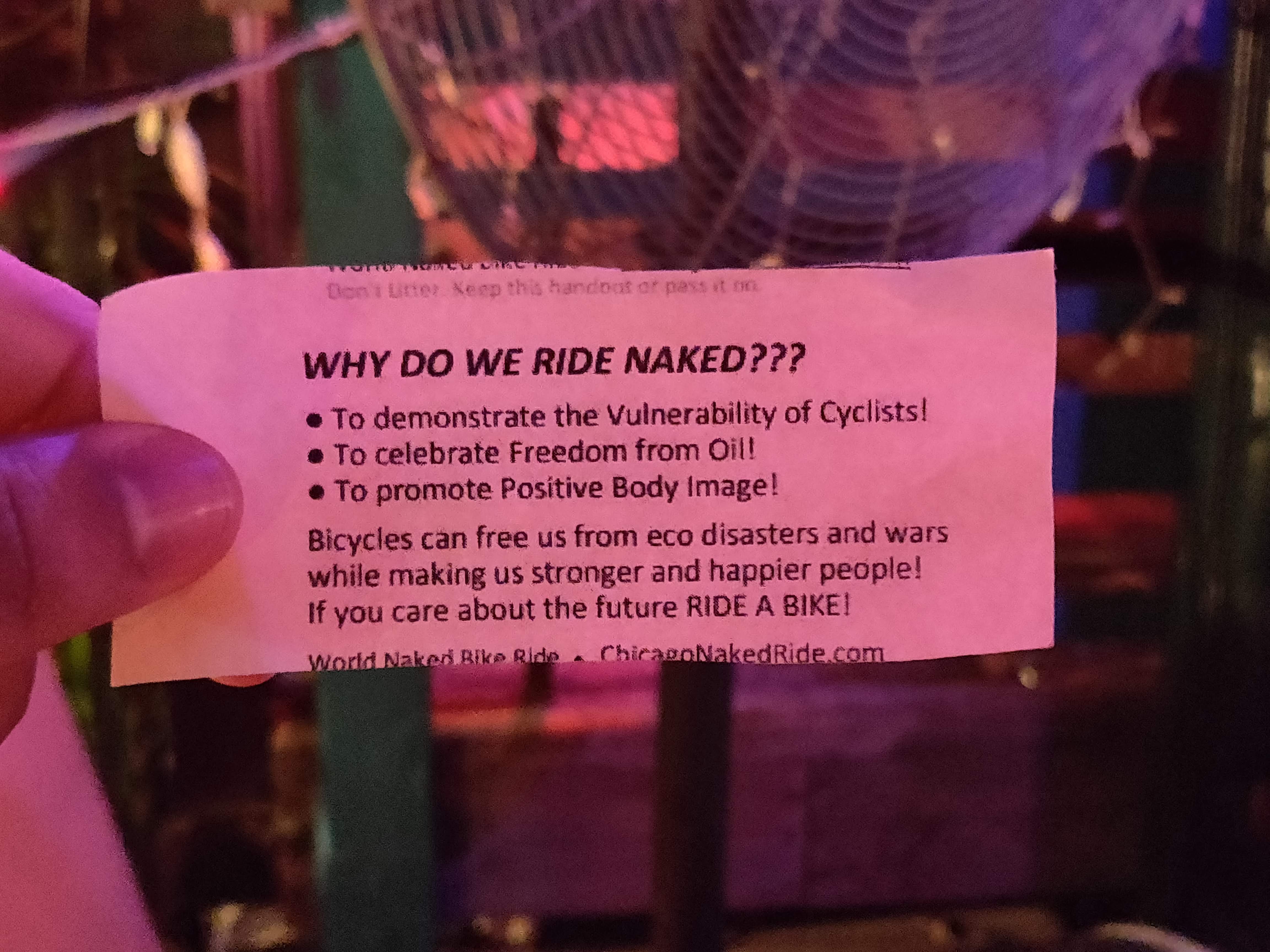 I thought I'd be really bothered by the heat here. Don't misunderstand me, it is hot here, really hot. Every day was pushing 100f (37c) with a low of 80f (26c) and the humdity was in the 30-50% range but somehow it didn't matter. The 3-4 months from May - September are known for being oppressively hot, but not really that much hotter than Raleigh albeit with a far lower average humidity level. This means for 8 months of the year you're left with a beautifully usable climate. It's the opposite of what I'm used to. 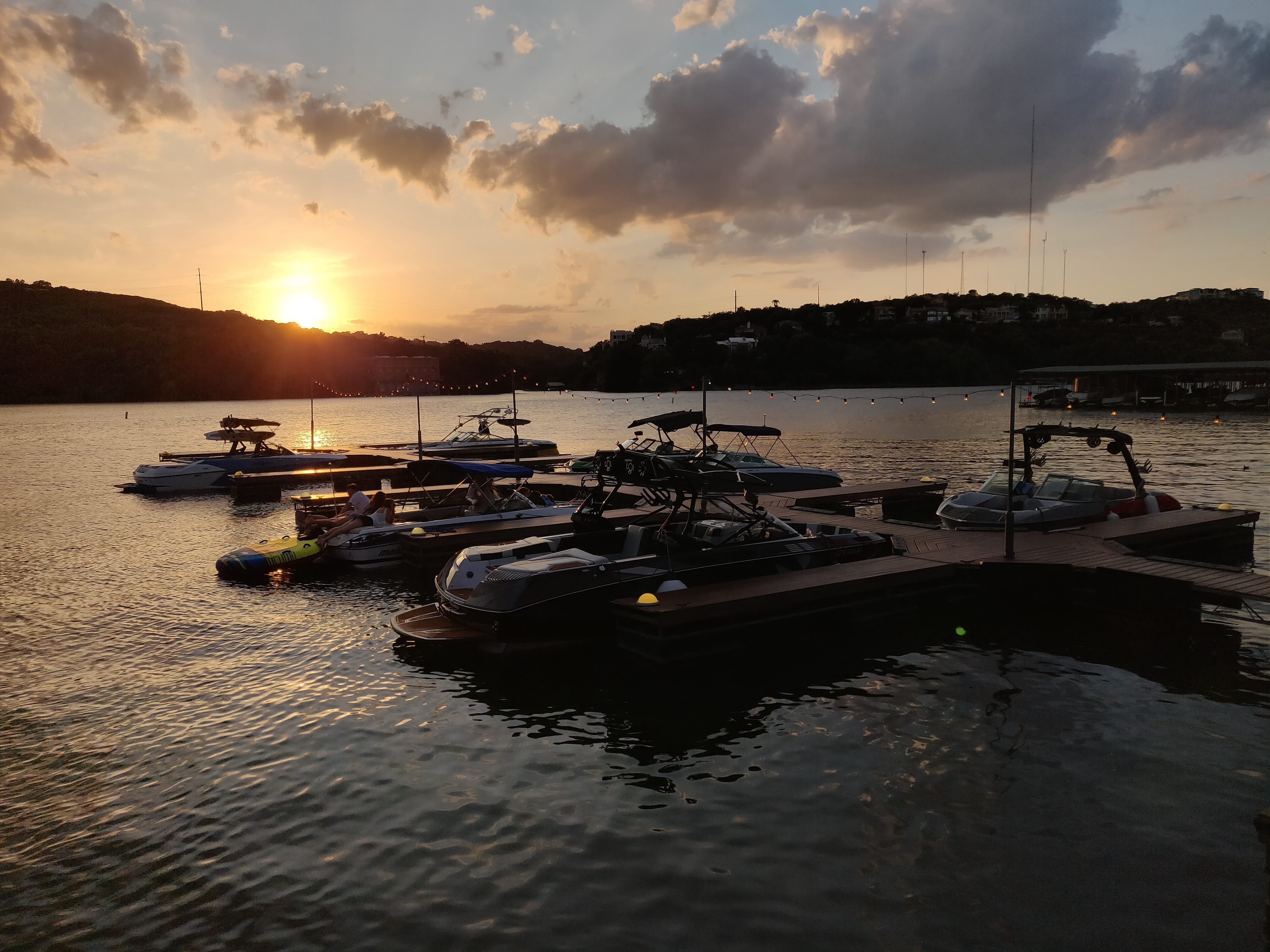 Normally in England we write off 4 months of the winter because it's too cold, too dark and too miserable to seriously go outside. Instead, we'd be writing off similar amounts of time but to over powering sunshine. My argument for cold vs hot is usually that you can wrap up but cooling down isn't as easy - however AC is a thing and I found myself more comfortable more of the time than in a British summer simply because AC is everywhere.

Add to the weather that Austin itself was really interesting. There was a huge motorcycle rally on when we were there. It hosts F1 and MotoGP races. There's a burgeoning tech sector and thousands of people are moving there annually. It just felt like a really great, happening place to be. It fits with our goal of being able to be outside more of the time. We even visited a fantastic dog park down by the lake / river thingy in the middle of downtown that I know Archie would just love.

Weirdly, unexpectedly and confusingly we found ourselves both falling in love with Austin, TX. Our decision just got a lot harder. 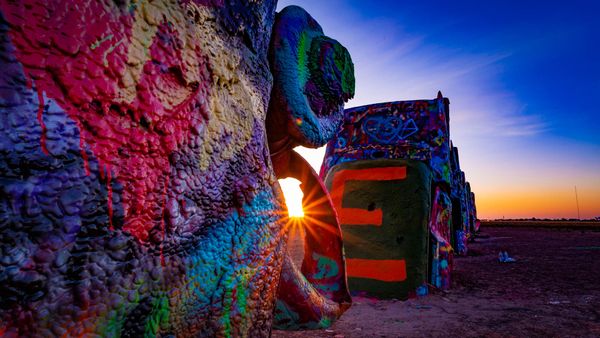 We only listened to it once, The Tony Christie song I mean. After all, the sun was shining on a Texas Sunday morning as we made our way out of 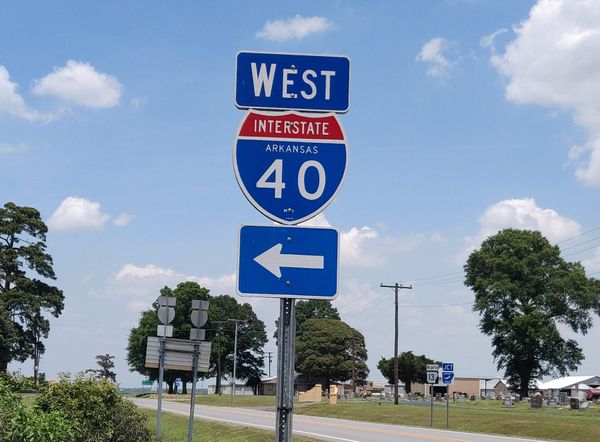