I have built many desks over the years. As my woodworking and maker skills slowly improve, so do the desks. This is a build log stretching back from February 2012 to today in August 2019.

A short history of desks

I built my first custom desk in Manchester back in 2012. Space was tight in a little terraced 2up2down and I couldn't find anything on the market I could afford or would fit. It was my first completely custom desk project. It took over one corner of our bedroom and was made from 18mm MDF. It's still going today and has been used by countless tenants since. Completely by accident I tripped over my all time favourite desk shape, The Belly.

The Belly was so supremely comfortable as it supports your elbows and arms completely whilst still granting you full access to the keyboard area. It also makes both left and right of the area much more usable for laptops and the like.

The next desk came in August 2012 when we moved to Exeter. This house was much bigger and I went a bit nuts thinking that bigger was better without actually considering utility. Cat was also doing her PGCE at the time so I designed and built a 'his and hers' desk with a big island in the middle (that just accumulated a load of junk obviously). I also began to experiment a little more with joinery vs just screwing stuff together randomly on the fly. Still MDF this one.

I realised whilst writing this that I still use the same Moleskin notebook I did in Exeter for all my projects now. Here is the sketch I made. Having just fitted my first kitchen you can clearly see the influence of simple carcass style boxes.

We moved after only 6 months because the landlord decided to sell. The house kinda sucked anyway as it didn't have proper double glazing, was really cold due to only having storage heaters and was damp. No matter, this meant an opportunity to build another desk!

Such a lovely spot this one. Two windows to look out of either side of the monitor directly overlooking the canal and big spillway in the middle of Exeter. Anyway, you can see an attempt to get some kind of a belly cutout in this desk. It was made 100% from recycled materials of the previous desk (you can spot some of the same underframing techniques).

A lot happened at this desk for me personally. It's where I discovered Linux and GPU passthrough. Ultimately I guess having this workspace led me to America and Red Hat via an MSc in Norwich. Speaking of which, we moved again after only 6 blissful months down by the canal in Exeter. New house means... new desk!!

Again 100% recycled. This desk was trying to make use of existing materials whilst still giving a his and hers desk. In the end I decided I didn't particularly enjoy sitting so close to the window as that passers by could probably read the news via my screen. Another iteration followed quickly which gave me inspiration for the next real Megadesk.

You can see my nerding is beginning to get out of hand. This shot was taken mere days before starting on a life changing journey to study my MSc in Computer Science at UEA. Little did I know. But Mum, it was sat here that I had that fateful conversation with you about the £5k I'd just inherited from Grandma and the "did you know UEA do a postgrad course for which the fees are... £5k?". Thanks Grandma. Thanks Mum.

Come November of that year I'd been busy learning how to code and spending hours at the desk.

I finally had a desk in the Norwich house I was happy with and it was still made out of 100% recycled materials from the first Exeter desk!

I had to knuckle down and actually do some work for a while as it turns out they don't just give away Master's degrees. I really loved this desk though, it had everything really. Space, zones for different activities, a decent view off into the distance (out the window even if it was just watching the cars picking kids up from school at 3pm), a belly cutout and somewhere for my right arm to rest when mousing around.

Now I didn't even recall this one until I was browsing through my photos but apparently I got bored of this iteration and did another one (again from recycled materials).

This didn't last long and before I knew it I was back in my old corner again.

Then I went and did it. I still regard this desk as one of my best ever. I began to graduate away from MDF by taking my first foray into glue lamination. Taking a 25mm thick piece of MDF and glueing a 4mm sheet of Oak faced ply to it.

I realise looking back now that I was clearly procrastinating instead of writing my MSc dissertation!

Early the following year (2015) we bought a new house. A new house that we absolutely gutted from top to bottom and that meant, surprisingly, a new desk did not follow until July of 2015 despite us moving in in March.

#7 was a real journey into trying some real woodworking in my new shed. The subframe wasn't just bit slabs of MDF anymore, it was a morticed and tenoned. I painted the legs white and was able to use that subframe to help during the glue lamination process of another 25mm MDF sheet and 4mm Oak faced piece of plywood (that's what's under all those paving slabs!).

I never really liked the usability of this desk. The rails of the frame often met with my knees. The straight edge of the desk didn't really suit me and yes it was big, but it wasn't as comfy as #6.

After getting that Ultrawide I decided I like screen real estate and went a bit daft.

I then ended up replacing the Ultrawide with a "Korean" 4k panel.

In August of 2016 my work took me to London. Which meant yet another house. And yet another desk. This one was a mashup of the materials from the two Norwich megadesks (both were 25mm glue lam MDF + Oak faced ply) so it worked pretty darned well!

#7 was really a triumph. Everything was within arms reach. There was a belly cutout. I had a nice view out down the garden watching the Squirrels in that big Horse Chestnut behind the house. Yes, it was possibly slightly too large for the room but only a bit and if you hadn't noticed I was able to reuse 90% of the mortice and tenoned frame I made plus the entire desk surface and my media unit began a second life too (in pieces).

I learned many new things here. I got into drone racing and taught myself to solder, all about electronics and let out plenty of magic smoke here. Such a great period of stability with work going well and I think back quite fondly on this period now. I mean, this desk iteration lasted well over a year!!

I also learned the value of having a workspace for making stuff but also an area above it to store tools and other misc stuff. In my case here that was a happy accident thanks to the windowsill behind the desk.

Alas, in March of 2018 I got into 3d printing. That requires one thing above all else, space. Plenty of space. Therefore, #7 had to go.

Yet another glue lam creation this one required two full MDF and Ply sheets to get the surface area my new 'maker side' craved.

We hadn't decided at this point that we were going to emigrate. 2 months later my Social Security Number came through and took a 3 week holiday where we both decided that we'd rather "regret emigrating than regret having never done it".

Therefore #8 lasted less than 6 months!! I think it looked quite good though really even if it was never properly finished.

Ok, that took way longer than I expected but I now have a chronology of my desk history. And hopefully when I start to explain some of the decisions I took when building my new desk in the USA it becomes clearer that I'm trying to incorporate my favourite sections of each of my previous iterations.

Here's a list whilst I'm thinking of it ready for part 2 of what I try to consider when designing a workspace / desk: 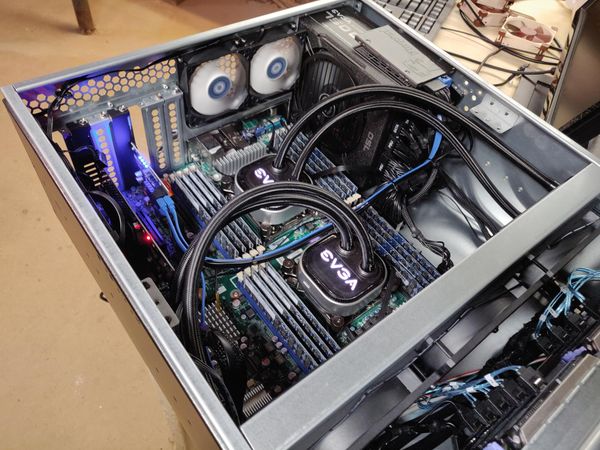 Things were getting a bit toasty in there. The watercooled Xeon E5 2690 v2 CPUs themselves were fine sitting at around 40c but the PCH (kind of like the Southbridge) and RAM were hitting 70c+ constantly. 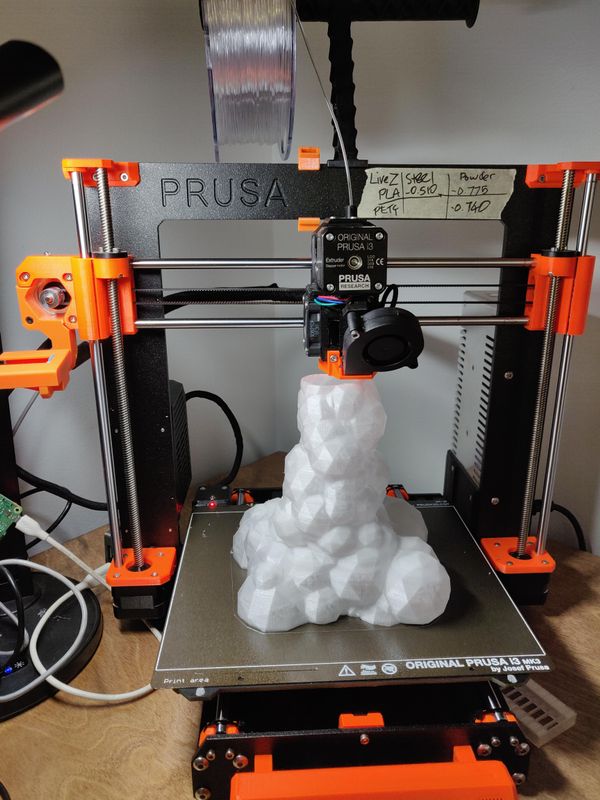 I run OctoPrint on a Raspberry Pi connected with a USB cable. If you are doing this you must ensure that Settings -> RPi [off] is set.