1 Taxi, 1 Ferry and 6 Trains later we are just bedding down for the night in Interlaken, bidding goodbye to the French for the best part of 2 weeks. The hostel here is quaint - and basic. We have bunk beds, shared bathroom and kitchen. Upon check in we let them know that we were out very early first thing in the morning (ie 6am) -  15 minutes later *knock knock*. What had they brought us? A little carrier bag with some ham and cheese sandwiches, a couple of juice boxes and fruit! For FREE! Love free stuff - especially when it’s food!!!!

Today took us all the way across and around Lake Geneva taking the Ferry from Thonon-les-Bains to Lausanne. From there we connected with a train through to Brig where we could board the infamous Glacier Express! However, through our own stupid fault we missed it by a matter of seconds - not to worry another (less busy) train was just behind.

Upon leaving Brig Bahnhofplatz surely the most scenic route we’ve ever travelled unfolded. The train runs on a rack system and seems to (unlike any I’ve been on before) pick up and drop the rack as and when it pleases - meaning several times there is an unpleasantly loud thud as the cogs snap in position. 2 hours later we found ourselves in Andermatt and sampled the local fare, which was good, and caught a connecting train onward to Disentis/Muster. The ascent out of Andermatt was incredible! Looping and tunnelling and screeching it’s way round corners inside the hill we rose higher and higher above the town. Really impressive stuff!

If you ever get chance to take the Glacier Express or anything along that route with the Matterhorn Gotthard Bahn, do it. A sensationally beautiful route from start to finish.

So it took us near enough 8 hours to cross Switzerland the scenic way. In the evening we took the sensible choice and boarded an ICE train from Zurich - Bern - Interlaken West. A first for us was that this was a double decker train! Very cool! To compare with the 8 hours to from East - West, it took us a mere 2 ½ hours on the main lines. If you’re in a hurry then, don’t Glacier Express (it’s quite possibly the slowest express train I’ve ever been on!).

Catherine excelled herself as the day progressed and we got further from FrogLand and closer to Zee Germans! She even managed to explain to the ticket lady so well about our tickets that she spoke to us in 3 different languages to try figure us out. (German newspaper that Cat was reading, English tickets and non-descript clothing!).

So after being up at 6am to watch the sunrise across Lake Geneva, this is Alex and Cat signing off for the night in Interlaken. First thing in the morning we will be on ‘the top of Europe’ with another early start to catch the first train at 6.30am! 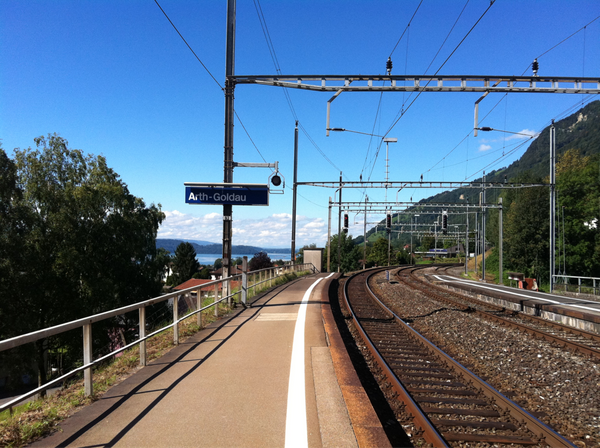 Lunch in Arth-Goldau, Switzerland as we await our 15:50 ICE to Milan in preparation for Sundays Grand Prix!! A late lunch as we’ve been awake since 5:30 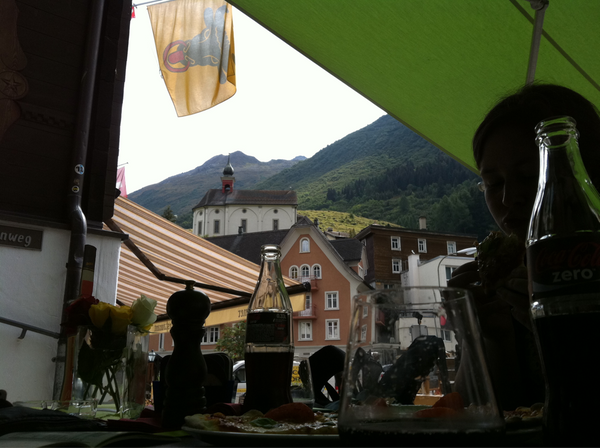