Apple announced a new 13” MacBook Pro this week. It featured a new scissor switch keyboard design, 10th generation Intel CPUs and the ability to install up to 32gb of memory. On paper, it should be a slam dunk purchase for me. But it isn’t.

My primary portable computing device has always been a laptop. If the iPad Pro and I were in a Facebook relationship the status would read, “it’s complicated”. YouTube is full of videos with folks getting excited about the iPad being able to replicate basic PC features such as USB thumb drive support, direct import of files from an SD card to Lightroom and a file browser. Why not just buy a laptop if that’s what you want? The iPad, and particularly the Pro iPads, are trading on future promises of what they could be rather than what they are. I’ve bought into this a couple of times and returned the device a few days later.

This iPad Pro dilemma has clouded my thinking for a couple of years at this point. Not so coincidentally, this is about the length of time my mid 2015 13” MacBook Pro has been feeling a little old and slow. Daily tasks such as web browsing, email and writing code are generally fine. But the moment I begin to edit photos in Lightroom or video in Final Cut, it’s a different story. The dual-core Intel i7-5557u chip from 5 years ago just can’t keep up with modern workflows or 4k video resolutions. It has been a truly fantastic machine and the fact that a laptop purchased in October 2015 is even still a remotely viable option, let alone my daily driver, is nothing short of astounding.

The 2015 13” MacBook Pro was the last of the truly great MacBooks. It has ports, lots and lots of ports - including a dedicated SD card reader and full size HDMI connector. It has a fantastic keyboard that is a genuine joy to type on all day. It hasn’t got a pointless touch bar, just a functional row of keys that remain exactly where I left them last. It has a beautiful display and it has MagSafe as well. I love this machine. It is probably the single best tech purchase I have ever made.

What about Linux? MacOS provides a happy middle ground between the application availability of Windows and the excellent development experience and customisation that Linux provides. It's not perfect, but for a pragmatic, just get stuff done OS, there's nothing better. Finding MacBook quality hardware to reliably run Linux is tough too. The Razer Blade line of laptops come close to the MacBooks in terms of build quality but I'd have to run Windows to get the most out of them and I'd rather not.

Which brings us to the announcement of the new 2020 13” MacBook Pro this week. No product is released in a vacuum and recently, Apple have released several new products which show that they are actually listening to their customers. The new 16” MacBook Pro swapped out the problematic butterfly keyboard, upgraded the 15” display to 16” and provided a cooling system capable of running the highest end Intel chips at high boost clocks all day. It’s a beast, but a beast with hefty price tag. I specced one up earlier today and my build came out to $3600 shipped, ouch. Then there’s the Mac Pro. Again, expensive but it nails the brief of what that computer should be - for a price, of course. So what’s wrong with the 13” MacBook Pro then?

A friend of mine messaged me on Monday asking if I'd seen the announcement. No, I hadn't! I rushed over to apple.com whilst warming up the credit card. I'd been waiting for this laptop for a couple of years at least, it was a definite buy. However, a lack of any discernable innovation and what feels like the absolute bare minimum of updates has left me wondering about the future state of the entire Intel based Mac lineup entirely.

Let's start with the good stuff. More memory and storage is now the default. The keyboard has been fixed, hallelujah. The laptop is slightly thicker to accomodate this, but that's fine with me. There is now a physical escape key. The CPUs are the latest and greatest 10th generation units from Intel. We kept a headphone jack (still annoys me I even have to consider this a plus point). And RAM can now go up to 32GB thanks to the support added by the 10th gen CPUs. We can also now spec up to a 4TB SSD too. Upgraded audio equipment with better speakers and microphone arrays are also included.

Time for some constructive criticism. The rumours of swapping out a 13" for a 14" display were proven false, has anyone at Apple seen the amazing Dell XPS 13 infinity edge display? WiFi 6 support is still nowhere to be seen across the entire Mac lineup, despite iPhones and iPads already having this feature. The Intel chips are inferior to the current crop of AMD mobile chips, although Apple do seem to have been able to extract the maximum they could from Intel here. The pointless touchbar remains, at least make it an option to remove it! No SD card slot on a 'pro' machine. No Magsafe equivalent. And a 720p webcam, in 2020, on a premium product feels like a middle finger cost saving measure.

These little details matter. Each on their own is manageable but it's death by a thousand papercuts.

Rumours have been circling about the Mac making the jump to Arm CPUs at some point this year or next. I presume we'll find out more on this at WWDC this year but until then, we have to take the new MacBook Pro at face value. A spec bump update such as this, in a chassis design that is 4 years old does not inspire huge amounts of confidence that this machine is where Apple are spending their time, love and R&D $$$.

Surely the reason we didn't see the rumoured 14" MacBook this week is that Apple are saving this for a new ARM based laptop. A new form factor to go with new hardware. The 13" being released without a few basic long term features such as Wifi 6 make dropping $2500 on this new laptop even harder. Is buying an Intel Mac right before a predicted architecture switch going to yield me the 5 years of reliability that my last MacBook purchase provided me?

Who knows. Well, Apple knows. We'll know when we need to. 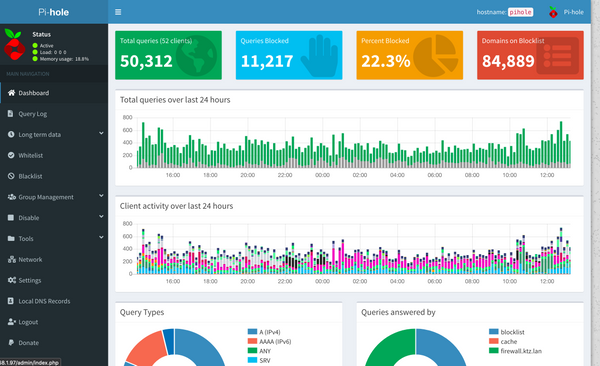 Pihole is a network wide ad blocker. Using DHCP we can tell every device on your network to automatically and transparently use Pihole for DNS. But what if you have

In May of 2019 Hashicorp released Terraform 0.12. This release completely changed the way in which variable interpolation was performed and whilst some backwards compatibility was kept, there were